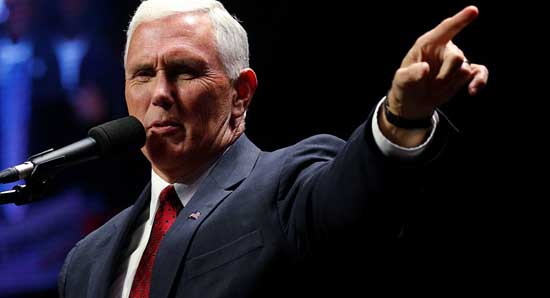 The dramatic announcement, made after a meeting with Netanyahu, raised speculation that the White House is finally preparing to unveil its long-awaited Mideast peace plan after numerous delays.

JERUSALEM: Vice President Mike Pence on Thursday announced that Israeli Prime Minister Benjamin Netanyahu and his main political rival Benny Gantz would visit the White House to discuss the “prospect of peace” with the Palestinians.

The dramatic announcement, made after a meeting with Netanyahu, raised speculation that the White House is finally preparing to unveil its long-awaited Mideast peace plan after numerous delays.

“We just completed a conversation about plans for next week,” Pence said after meeting the Israeli leader at the U.S. Embassy in Jerusalem. “President Trump asked me to extend an invitation to Prime Minister Netanyahu to come to the White House next week to discuss regional issues as well as the prospect of peace here in the Holy Land.”

He said Netanyahu had asked that his chief opponent, Benny Gantz, also be invited and that both men had agreed to come.

“We have had no better friend than President Trump,” he said. “With this invitation, I think that the president is seeking to give Israel the peace and security that it deserves.”

Channel 12 TV, citing Israeli officials, said the plan is expected to be extremely favorable toward Israel, and offer it control over large parts of the occupied West Bank. The Palestinians seek the entire territory, captured by Israel in 1967, as the heartland of a future independent state. Most of the international community supports the Palestinian position.

Pence made no mention of the Palestinians, who have already pre-emptively rejected the plan, accusing the White House of being unfairly biased toward Israel.

Pence was among dozens of world leaders in Jerusalem on Thursday for the World Holocaust Forum. Many of the participants, including Russian President Vladimir Putin and French President Emmanuel Macron, also paid visits to the Palestinians in the West Bank.

In the West Bank, a Palestinian official said President Mahmoud Abbas asked the visiting French and Russian presidents to support the Palestinian position when the plan is published. “He asked them to refuse and act against any Israeli annexation of Palestinian lands,” said the official, speaking on condition of anonymity because he was discussing closed meetings.