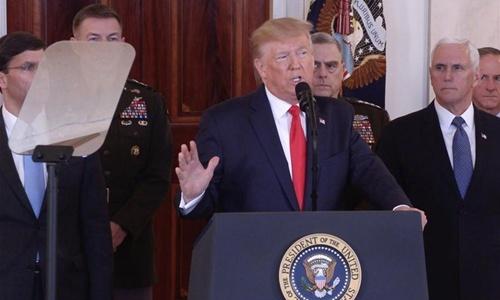 When US President Donald Trump announced he would be attending this year’s World Economic Forum in Davos, Switzerland, many expected a toned-down version of the free trade-bashing Trump, whose tariff wars have caused serious damage to the world economy and the global value chain. After all, Trump had just completed what he boasted were the biggest trade deals ever made with China, Canada and Mexico.

That’s not even remotely close to what happened when the US president showed up at the gathering of world leaders, corporate executives and celebrities. Not only did Trump, who faces an impeachment inquiry at home and is in dire need of political ammunition ahead of a heated election season, went on and on about how his economic policies have led to “an economic boom the likes of which the world has never seen before,” he appeared to be doubling down on his toxic economic and trade policies.

He touted that most tariffs on Chinese products would remain during talks for a phase two agreement and again falsely claimed that the US was being paid “billions and billions of dollars a year” because of the tariffs. At the forum, Trump renewed his threat to impose hefty tariffs on European cars if the EU does not agree to a trade agreement in favor of the US. If the US president might seem erratic and just wants to appear tough on the global stage for a partisan audience at home, US Treasury Secretary Steven Mnuchin, who was also in Davos, left no doubt that the US would continue on the same path. Echoing his boss, he threatened tariffs on Italy and the UK if the two US allies went ahead with taxes on US technology companies.

Mnuchin, who plays a major role in the US’ trade negotiations with China, added that the US could maintain some tariffs on Chinese products even if the two countries reach a more comprehensive deal, according to the Wall Street Journal.

Needless to say, such comments are not at all helpful coming before Beijing and Washington even start talks on a phase two agreement. Laying out the US’ stance ahead of the talks will definitely not bode well with Chinese officials, who have already shown reluctance in rushing into negotiations for a phase two deal.

While the US’ intention to continue hardball tactics might not be so surprising to many, the risk of carrying on the tariff war might have been underestimated. Many around the world have been focused primarily on the economic losses stemming from the trade wars, but the consequences could be far more dangerous than hundreds of billions of dollars lost for businesses and slower GDP for China, the US and the world.

If the US continues the tariff war, a trade decoupling, as many radical elements in the US are wishing for, could become reality. If the Chinese and US economies will no longer be intertwined as they are now, things could easily get out of control for what is widely believed to be the world’s most consequential bilateral relationship.

The warning lights are already flashing. Trump started the tariff war with China to drive down the US’ trade deficit with China, but the tariffs have also contributed to significant declines in bilateral trade. Trade decoupling has already began, as China’s share of US trade and the US’ share of China’s trade declined in the first nine months of 2019 from the same period in 2016, according to the Financial Times.

Some in Washington might loath the massive trade between China and the US, but that has been a bedrock and stabilizer of China-US relations. What the bilateral relationship will be without it is simply unimaginable.