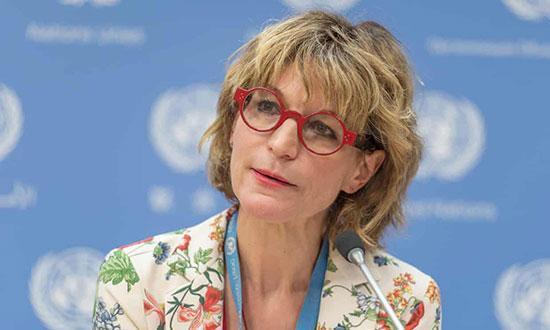 Stephanie Kirchgaessner in Washington  – The Guardian

Presidents and prime ministers have mostly ignored serious human rights violations by Saudi Arabia, including the premeditated murder of a journalist, since the rise to power of Crown Prince Mohammed bin Salman in 2017. But one woman has shown an unflinching determination to take the fight to the kingdom.

Agnes Callamard, a French human rights specialist who serves as an independent expert on extrajudicial killings for the UN, opened a new front this week when she and her colleague David Kaye presented detailed allegations of how Prince Mohammed’s WhatsApp account was used to hack the phone of Jeff Bezos, the Amazon boss and owner of the Washington Post.

Last year a damning investigation by Callamard into the murder of the Post columnist Jamal Khashoggi revealed harrowing details of his last moments, even describing the sound of the struggle and plastic sheets rustling, and the last words Khashoggi uttered. Callamard concluded that it was a state-sponsored killing.

The Bezos news has dominated talk at Davos and in Silicon Valley and set off a frenzy of speculation about who else the crown prince may have been messaging on WhatsApp.

Callamard says she has faced death threats for her work. The slight 56-year-old, who sometimes wears bright blue circular frame glasses and speaks impeccable English with a heavy French accent, was once personally threatened by the Philippine president, Rodrigo Duterte, who said he would slap her if she pursued an investigation into thousands of extrajudicial killings in connection to his war on drugs.

In her work at Amnesty and other campaigning organisations, before she became a UN special rapporteur, she has taken on migration and displacement of refugees, attacks on the press, and conflict situations.

“Agnes is effective because she understands that human rights work is work. It’s a job. And it needs to be done well, as opposed to people making noise on Twitter,” says Matthew Caruana Galizia, the son of the murdered Maltese journalist Daphne Caruana Galizia. “She does not lash out. She does the work to document what really happened and then, after that, there is a drive for accountability.”

He added: “I really admire what she is doing. A lone woman holding the unaccountable accountable. She has no budget, no office, nothing. And look at how Saudi Arabia fears her.”

Callamard and three other UN special rapporteurs were the first officials to call for an independent public inquiry into Daphne Caruana Galizia’s murder, emphasising within days of the killing the importance of ensuring the independence of the investigative judge.

This week Callamard told the Guardian that her desire to expose the allegations about the Bezos hack reflected a determination to highlight who could be of “strategic interest” to Saudi Arabia.

And then there are the dangers of malware technology, which is so sophisticated and so hard to detect that nobody is really safe from it.

Kaye, the special rapporteur for freedom of expression, says he was sceptical when Callamard set out to pursue an investigation of Khashoggi’s murder in Turkey. Both investigators had worked throughout the autumn of 2018 campaigning to get the UN to commit to an independent inquiry, writing op-eds and letters to the secretary general.

“She became increasingly insistent that we had to do something, that we needed to launch an inquiry of our own … so she proposed to do her own and to pull together experts and get Turkey’s consent [to investigate there],” Kaye says.

He had doubts about whether it was the right strategy but ultimately became convinced she was right. “She had this vision for what one expert could do in order to move in a concrete way,” Kaye says. “And I think the way she pushed that forward was not just admirable but, to a certain extent, heroic. She spent her own time and in some cases resources to do it.”

When Callamard was asked by the Guardian what influenced her commitment, she pointed to the story of her grandfather Leon Savioux, a member of the French resistance. Savioux had enrolled to fight in the first world war at the age of 17 and suffered from exposure to poison gas, which plagued him for the rest of his short life. He was executed by the Nazis on 15 August 1944, days before Paris was liberated.

“Every summer on 15 August, my family would participate in a commemoration event in memory of the members of the resistance and those who died for their country. This was an important moment for me as a child,” Callamard recalls. Her mother was an orphan at the age of one but went on to become a school teacher who fought for social justice.

Asked how she copes with what she describes as the “tingling” sensation she sometimes feels at the back of her head given her dangerous work, Callamard recites some practical advice.

“I can tell you, I keep a healthy lifestyle. Sport. Being strong. Being loved and loving back. Feeling empathy and compassion. Keeping centred and not allowing the fear to drive anything I do. Keeping very centred on what it is I have been asked to do,” she says.

It is also about always remembering the people for whom she works. “Jamal, the many Saudis who live in exile – and I know how incredibly painful it is – people who are languishing in prison for speaking up, Loujain [al-Hathloul, an imprisoned Saudi activist], the courageous protesters in Iran or in Iraq or in Lebanon, Hatice Cengiz [Khashoggi’s fiancee]. So I don’t really think about the tingling feeling, to be honest.”