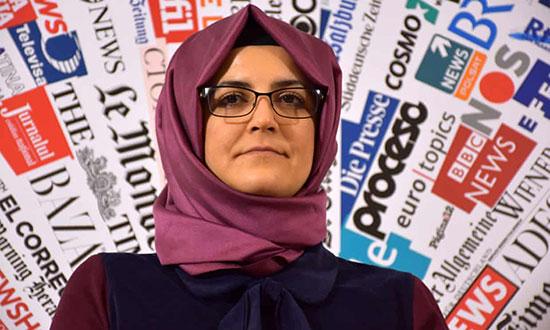 Stephanie Kirchgaessner in Washington  – The  Guardian

Hatice Cengiz has been an outspoken advocate for justice for Jamal Khashoggi, who was killed in the Saudi consulate in Turkey in October 2018. Photograph: Anadolu Agency via Getty Images

US intelligence authorities urged British counterparts to keep a close eye on Hatice Cengiz, the fiancee of the murdered Saudi journalist Jamal Khashoggi, after they became aware of a plan by Saudi Arabia to keep her under surveillance in the UK last year, according to western intelligence sources.

The US believed the kingdom had the “ambition and intention” to monitor Cengiz in London last May, seven months after Khashoggi was killed in the Saudi consulate in Istanbul, where he had gone to obtain papers so the couple could marry.

It is not clear if the intended surveillance of Cengiz was electronic or physical, or if it was successful.

However, the revelation that intelligence agencies feared Cengiz was being targeted in this way – and that Saudi Arabia was preparing to do so in the UK so soon after the outcry over Khashoggi’s murder – will have caused alarm in the diplomatic community.

It will also highlight the concerns of human rights activists, who have long argued the Saudis are using surveillance to monitor and intimidate dissidents and critics of the kingdom.

“Saudi Arabia is trying to put a lid on the whole [Khashoggi] thing, so it is understandable that they would try to make sure that Hatice’s voice and advocacy is limited,” said Hala Aldosari, a Saudi activist and fellow at the Massachusetts Institute of Technology (MIT). “All sorts of unlawful behaviour continues, nothing has changed.”

Cengiz, who is Turkish, has been an outspoken advocate for justice for Khashoggi, who was killed in October 2018.

US intelligence officials have determined with a medium to high degree of confidence that the killing was ordered by Mohammed bin Salman, the Saudi crown prince. Saudi Arabia has denied the prince was personally involved.

The Guardian’s revelations about the effort by US and British authorities to ensure Cengiz was protected follows a report by the Washington Post columnist David Ignatius that the US state department recently rejected a proposal by a US defence company, DynCorp, to train Saudi intelligence services because the kingdom did not have “proper safeguards in place to prevent lawless covert operations” like the killing of Khashoggi.

The column cited two ongoing US government concerns: that Saud al-Qahtani, a close adviser to the crown prince who has been sanctioned for his role in arranging the murder, was still operating behind the scenes, and that there were “reports” that Cengiz and one of Khashoggi’s sons had been “under Saudi surveillance in London last summer”.

A spokesperson for the state department said: “We have no comment on this issue.”

US intelligence agencies are required under law to warn individuals if they are known to face an imminent risk of murder, kidnapping and serious bodily harm, according to a 2015 directive that is known as the “duty to warn”.

The revelation about Cengiz suggests that, far from reining in a Saudi campaign to silence critics at home and abroad, the Saudi government is reinforcing what one former Obama administration official called the state’s “posture” to monitor dissidents and critics.

“They use a variety of tools as a matter of course. It is state policy,” said Andrew Miller, a Middle East expert who served on the national security council under Barack Obama. “The second point is that obviously the fallout from the Khashoggi murder has not fundamentally changed the Saudi state’s posture. Fortunately no one else has been kidnapped and killed but they are still pursuing information about their opponents.”

New details about the surveillance concerns will ignite further criticism of the Saudi government as UN investigators have called for a thorough examination of new claims that Jeff Bezos, the billionaire owner of the Washington Post, was seemingly hacked after being sent a WhatsApp video file from the personal account of Prince Mohammed.

Agnès Callamard and David Kaye, UN special rapporteurs who are investigating the matter, have pointed to a “pattern of targeted surveillance of perceived opponents” of the kingdom, especially people who are of “strategic importance”.

Bezos, the chief executive of Amazon, has declined to comment publicly, but this week tweeted a picture of himself standing next to Cengiz at a memorial for Khashoggi in Istanbul. He used the hashtag #Jamal in the post.

A spokesman for Saudi Arabia in Washington did not return a request for comment. The Guardian contacted Cengiz’s assistant, but Cengiz declined to provide a comment.

Saudi Arabia has previously denied using surveillance tools against human rights activists and critics of the kingdom. It has described the allegations about the hacking of Bezos’s phone as “absurd”.

The Guardian reported last year that the CIA alerted counterparts in Norway to a potential Saudi threat against a pro-democracy activist called Iyad el-Baghdadi, a frequent critic of the Saudi regime who lives under asylum protection in Norway.

The alert on 25 April – about seven months after the killing of Khashoggi – prompted Norwegian authorities to rush to Baghdadi’s residence.

Baghdadi said in a phone interview with the Guardian at the time: “The way I understood it was, the Saudis have a crosshairs on me, but there is no idea of what they are going to do.”

What’s behind the conflict between Armenia and Azerbaijan?