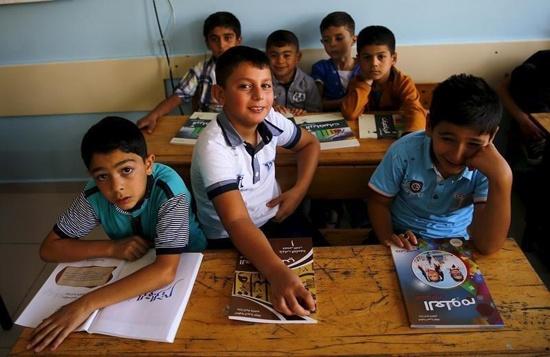 Turkey has quickly figured out how to use public resources to get more than half a million refugee children enrolled in schools, head of a Turkish charity working on refuge issues said on Jan. 25.

“Turkey has quickly managed to mobilize public resources and approximately 645,000 refugee children were enrolled in schools in a very short period, while the need was high above its capacity,” Karataş said.

“The right of education is supported in Turkey for all children whose families have sought international or temporary protection, and they have rights to enroll in public schools,” he added.

Stressing a variety of adult education activities that refugees can benefit from, such as Turkish language courses and vocational activities which are offered for free by Turkey’s Ministry of National Education (MEB) General Directorate of Lifelong Learning, Karataş drew attention to the importance of education for the integration process.

He said refugees are mostly interested in learning Turkish which helps them stand on their own and adapt socially.

“One of the biggest problems that migrant children face in the process of social cohesion is the language barrier,” he said, adding that communicating in Turkish is a serious obstacle not only in education, but also in daily life, hospitals and public institutions.

He also said education can prevent children from situations like early marriage and child labor by helping increase their cohesion level.

MÜDEM was established in Ankara in 2014 to carry out activities at home and abroad for problems of forcibly displaced persons and it has been providing social, legal, and psycho-social support, organizing various activities for the integration of refugees in accessing rights and services.

Despite of this high success, approximately 400,000 children are out of school for various reasons. This number contains a high risk for children’s future. MEB, U.N. International Children’s Emergency Fund (U.N.ICEF) and Association for Solidarity with Asylum Seekers and Migrants (SGDD-ASAM) work hard to increase school attendance.

“But the good news is that the attendance percentage is increasing rapidly each year,” Karataş concluded.

The United Nations General Assembly proclaimed Jan. 24, as International Day of Education, in celebration of the role of education for peace and development.