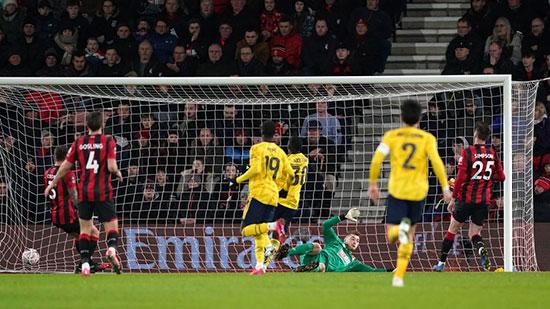 Sporting Life · Journalist
Arsenal academy graduates Bukayo Saka and Eddie Nketiah struck to send the Gunners through to the fifth round of the FA Cup with a 2-1 win at Bournemouth.

Nketiah’s first Arsenal goal since the 3-1 Premier League win at Burnley in May confirmed a commanding victory for Mikel Arteta’s men and condemned struggling Bournemouth to another demoralising defeat.

Saka set the Gunners on their way with his third goal of the term, before teeing up Nketiah for the easiest of finishes at a chilly Dean Court to tee up a fifth-round trip to Portsmouth.

Young Cherries striker Sam Surridge finished neatly in added time to offer the hosts late hope, but Lewis Cook blazed over with the last action as Eddie Howe’s men failed to force a replay at the Emirates.

Arsenal will be more than happy with a trip to League One’s Pompey, leaving just that ankle blow to Mustafi as the sole blot on their Monday night trip to Dorset.

The Gunners can now prep for Sunday’s league trip to Burnley with a spring in their step, while another miserable night for Bournemouth leaves Eddie Howe’s Cherries further embattled.

A run of league fixtures against Aston Villa, Sheffield United and Burnley could now prove decisive in their Premier League survival fight.

Arsenal began their south coast victory quest within five minutes, with Saka blasting into the roof of the net for a fine finish, albeit one he should never have been afforded.

Willock rolled Gosling with risible ease and played on to Martinelli on the inside left. Then one Gunners teenager fed another and Saka lashed home.

The goal was as pleasing on the eye for Arsenal as it was worrying for a Bournemouth side lacking any kind of bite.

The Cherries’ problematic malaise inched on throughout an underwhelming half, and the only surprise was that Arsenal added just one more goal.

Nketiah enjoyed a productive outing on his second Arsenal appearance of the season after returning from his loan at Leeds.

Saka cantered down the left in acres of space, rolled a facile ball across the face of goal and Nketiah tapped home a move he had started with a neat lay-off to Willock.

Harry Wilson found the target to draw a regulation save from Martinez, then Gosling headed high over the bar.

Arsenal continued to dominate without any great exertion after the break, but suffered a blow when Mustafi was carried off just shy of the hour.

Bournemouth capitalised on the defensive readjustment to cause mayhem at a corner, but Jack Simpson headed wide with the goal at his mercy after Martinez unwisely stepped off his line.

As Arsenal looked to play out the win, Surridge popped up with a smart finish after a neat piece of control.

Eight minutes of added time even allowed Bournemouth to hunt an equaliser, but Cook blasted over from 18 yards.