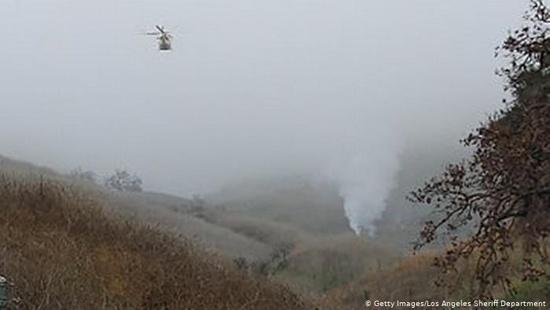 The pilot’s final radio transmission revealed he would climb to avoid a cloud layer, say investigators. The weather conditions during the tragic flight are being probed by authorities.

The pilot of the helicopter that crashed with NBA legend Kobe Bryant on board had requested and received special clearance to fly in heavy fog minutes before the crash, federal aviation investigators said on Monday.

Investigators were scrutinizing weather conditions and whether it played a role in the fiery crash that killed Bryant, his 13-year-old daughter, and seven others.

The pilot’s final radio message to air traffic controllers said he was climbing to avoid a cloud layer, an accident investigator said.

An 18-member National Transportation Safety Board (NTSB) team and FBI forensic specialists were deployed to the crash site to investigate the debris across the hillside just outside Los Angeles.

Weather a factor in investigation

NTSB board member Jennifer Homendy told reporters Monday that weather was just one factor in their investigation.

“We take a broad look at everything in an investigation — man, machine and the environment. And weather is just a small portion of that,” she said in a press conference.

Homendy has called on the public to present any photographs that could assist document local weather conditions at the time of the crash. She added that sections of the helicopter, including a piece of its tail and a rotor, were scattered around an impact crater where the aircraft smashed into a high grassy slope.

The Los Angeles County coroner’s investigators said they had retrieved the first three bodies from the site and were searching for further remains.

Prior to the crash, the pilot was flying at 1,400 feet (427 meters) when he went south and then west, said Homendy.

After the pilot had received the go-ahead to fly in heavy fog, he then asked for air traffic controllers to give “flight following'” assistance to keep the Sikorsky S-76B clear of other aircraft in limited visibility but was told the helicopter was too low to be picked up by other traffic radar, Homendy explained.

About four minutes later, the pilot “advised they were climbing to avoid a cloud layer,” she said. “When ATC asked what the pilot planned to do, there was no reply. Radar data indicates the helicopter climbed to 2,300 feet and then began a left descending turn. Last radar contact was around 9:45 am.”

It was unclear whether the pilot heard the warning.

Tragedy in the air

The fatal crash took place in the Santa Monica hills outside of Calabasas, about 40 miles (64 kilometers) northwest of central Los Angeles on Sunday.

The pilot and all eight passengers, including Bryant and his daughter, Gianna, were killed. The helicopter was destined for a girls’ basketball tournament, where Bryant was to have coached his daughter’s team that day.

According to the NTSB, the twin-engine Sikorsky S-76B departed from John Wayne Airport in the Orange County city of Santa Ana on a flight headed for a regional airport approximately 80 miles to the northwest, in the coastal town of Camarillo.

Gary C. Robb, an aviation lawyer, told Reuters that public recordings of radio calls between the helicopter and air traffic control during the flight show that the pilot tried to stay below clouds so that he could see the ground and avoid having to fly on instruments.

“The dialogue between the pilot and air traffic control leads me to believe … he kept wanting to go lower and lower, beneath the fog and ceiling, as we call it, and that could have led him to fly so low that he flew into the mountain,” Robb said. During his transmissions, the pilot “was calm and controlled the whole time,” calling the communications “extremely normal and routine.”

Robb added that a possible mechanical failure could have been a factor, particularly in light of “ear-witness” accounts that the helicopter sounded like it was “sputtering” minutes before going down.

He described the aircraft, however, as “reliable” and “generally safe.”

Homendy said the pilot was an experienced, commercially licensed aviator and certified flight instructor with at least 8,200 hours of flight time.

Bryant was known to frequently travel by helicopter to avoid Los Angeles traffic. The NBA champion spent 20 years with the Los Angeles Lakers.