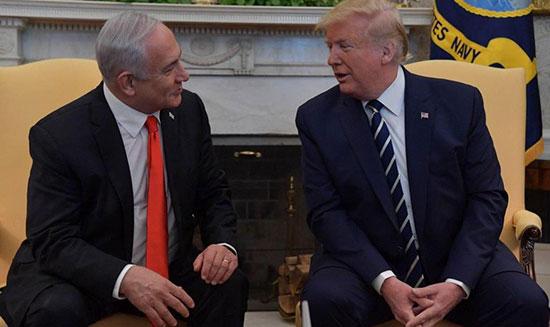 Opinion: The president is offering a cohesive plan that includes bitter pills for both sides, but with elections looming, the prime minister may try to adopt only aspects palatable to his base – and the White House may let him get away with it

In July 2017, U.S. President Donald Trump went to the Pentagon to meet with senior defense officials.

The generals wanted in effect to give the president a tutorial. Trump hated every minute of it.

“A Very Stable Genius: Donald J. Trump’s Testing of America,” a recently published book by Washington Post reporters Philip Rucker and Carol Leonnig, quotes some excerpts from that meeting: “You are all losers,” Trump told senior military commanders, “you don’t know how to win anymore.”

The president went on a tirade, calling the Pentagon leadership “a bunch of dopes and babies.”

Then he insulted everyone in the room by saying, “I wouldn’t go to war with you people.”

On Monday, Trump was to meet with an Israeli general. His impression of his guest is no less significant than the peace plan that the two men will be discussing.

Over six feet tall, blue-eyed and with a firm handshake, Gantz has attributes Trump can only admire.

Some Blue & White advisers have allegedly told him to “suck up” to his host. “Trump loves it,” they say.

Gantz, the good trooper that he is, was to begin the meeting by lavishing praise on “the best friend Israel has had in generations.”

How the president will react to the compliment remains to be seen. He may take to Twitter to say he had met a great leader, a giant, full of promise. He may decide to mock Gantz’s heavy Israeli accent.

Trump may even do both, depending on his whim and on what Prime Minister Benjamin Netanyahu whispers in his ear.

Because politics is everything, both in Israel and in the United States these visits are all about elections, impeachment, and prosecution.

Trump’s trigger-happy Twitter finger was the subject of preparatory meetings held between Gantz and his aides, who came to the conclusion that turning down the president’s invitation could subject the Blue & White leader to a barrage of insulting tweets that on the eve of elections could cause real damage.

There was no choice but to pack a bag and go, especially since the White House made real strides towards the former military chief ,and assured him he would have a one-on-one meeting with the president before the arrival of the prime minister. Netanyahu then pushed his trip up a day to spoil the party. How childish.

Trump’s peace plan, which was initially sold as a dream come true for the settlement movement, turned out to be far removed from it.

Eshel, a serious man, returned from the meeting with lists of items and a proposed map of potential future borders – though no map was presented by the administration.

The outline included some security items that were pleasing to the former military brass in the Blue & White leadership. The Palestinians, according to the plan, have no joint border with any Arab state, except for the Philadelphi Route along the Gaza border with Egypt.

The IDF can also erect outposts anywhere in the West Bank in case of an emergency, including inside Palestinian cities. Israeli sovereignty is extended to more territory, as many of the settlement blocs are to be recognized by the U.S.

But the plan also includes some aspects that are less palatable to Blue & White and even more so, to the right-wing. For instance, territory within the Green Line in the Negev Desert and in Wadi Ara in the center of the country, which are part of Israel today, will be handed over to the Palestinians.

In addition, half of Area C in the West Bank will be passed on to Israel but the other half will be part of the future Palestinian state. Some 10,000 settlers who today live in outposts will have to be moved – more than were made to leave Gush Katif settlements in the 2005 one-sided pullback from the Gaza Strip. These settlers are hardliners for the most part.

Israel will also be forced to relinquish control of some East Jerusalem’s neighborhoods that were captured in 1967, hitting a sore spot by dividing the eternal capital.

Since there is a zero chance that the peace plan will come to fruition, these are all moot points.

Netanyahu will express a positive approach in general terms, allowing him some maneuverability, while the Palestinians will no doubt reject the plan.

The more interesting question is what would the Trump administration do if Netanyahu, facing a difficult election, tries a one-sided move and adopt only those aspects of the plan that are acceptable to his right-wing supporters?

The White House messaging so far is that this is a cohesive package but there will surely be pressure on the administration to accommodate the prime minister.

The key is in the reaction on the ground. Israeli security officials believe that as long as this remains theoretical, the Palestinians will be able to swallow the pill. The same applies to the public reaction in Jordan, Egypt and internationally. But how long can that last?

The Israeli left had always hoped the U.S. would provide a solution to the conflict with the Palestinians, that Uncle Sam would save Israel from itself.

Now that hope has become the domain of the right-wing, who dream that Trump will validate annexation.

Counting on the U.S. is childish and provincial; this is our problem to solve. America can help but it can also cause harm.

With or without the Trump plan, Israel is heading towards a one-state solution, an apartheid state between the Jordan River and the Mediterranean Sea.