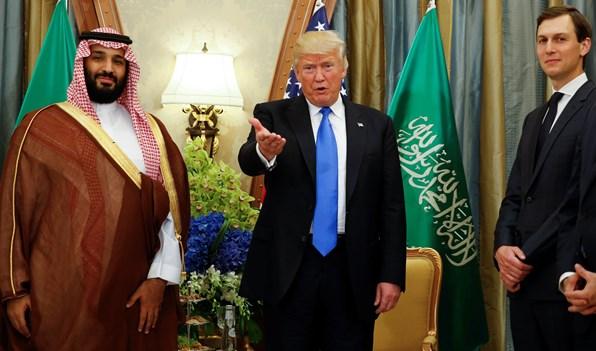 “The Kingdom reiterates its support for all efforts aimed at reaching a just and comprehensive resolution to the Palestinian cause,” said the Saudi Ministry of Foreign Affairs.

“The Kingdom reiterates its support for all efforts aimed at reaching a just and comprehensive resolution to the Palestinian cause,” said the Saudi Ministry of Foreign Affairs.
“The kingdom appreciates the efforts of President Trump’s administration to develop a comprehensive peace plan between the Palestinian and the Israeli sides, and encourages the start of direct peace negotiations between the Palestinian and Israeli sides, under the auspices of the United States,” the statement reads. It also called to resolve any disagreements with aspects of the plan through negotiations, “to move forward the peace process to reach an agreement that achieves legitimate rights of the Palestinian people.”

Crown Prince of Saudi Arabia Mohammad Bin Salman told Palestinian Authority President Mahmoud Abbas that “our position towards the Palestinian issue has not changed, all the Arabs and us are with you. The establishment of a just and comprehensive peace must be worked for. Peace is a strategic choice that will bring a permanent solution that will fulfill the rights of the Palestinian people,” according to Channel 13.

The Egyptian Ministry of Foreign Affairs issued a similar statement, calling the sides to consider the plan to resolve the Israeli-Palestinian conflict.
“The Arab Republic of Egypt appreciates the continuous efforts exerted by the US administration to achieve a comprehensive and just settlement of the Palestinian issue, thereby contributing to the stability and security of the Middle East, ending the Palestinian-Israeli conflict,” the ministry said Tuesday.
“Egypt recognizes the importance of considering the US administration’s initiative from the perspective of the importance of achieving the resolution of the Palestinian issue, thus restoring to the Palestinian people their full legitimate rights through the establishment of a sovereign independent state in the Palestinian occupied territories in accordance with international legitimacy and resolutions,” the statement reads.
It went on to call the two sides “to undertake a careful and thorough consideration of the US vision to achieve peace and open channels of dialogue, under US auspices, for the resumption of negotiations to present their respective views on reaching an agreement that satisfies the aspirations of both peoples to achieve a comprehensive and just peace and the establishment of an independent Palestinian state.”
The Qatari News Agency released a statement, saying that “the State welcomes all efforts aiming towards a longstanding and just peace in the occupied Palestinian territories.”
“It also appreciates the endeavors of President Trump and the current US administration to find solutions for the Palestinian-Israeli conflict, all solutions should be consistent with international law and the relevant UN resolutions,” the statement continues.
Qatar also called on the sides to hold direct negotiations. However, unlike Saudi Arabia and Egypt, the Qatari statement also calls for a Palestinian state “within the 1967 borders, including East Jerusalem,” as well as the right of return.
Ambassador of the United Arab Emirates, Yousef Al Otaiba, said that the UAE appreciates continued US efforts to reach a Palestine-Israel peace agreement. “This plan is a serious initiative that addresses many issues raised over the years,” he wrote.
“The plan announced today offers an important starting point for a return to negotiations within a US-led international framework,” he added. Al Otaiba was among the three Arab Ambassadors who attended the ceremony at the White House earlier on Tuesday. Ambassadors of Oman and Bahrain attended the event as well, signaling warming ties with Israel and support for the administrations’ vision.
Jordan and Turkey, on the other hand, were critical of the plan. Foreign Minister Ayman Safadi said in a statement following the announcement of the US peace vision that “independent Palestinian state on June 4, 1967 lines with East Jerusalem as its capital, living in peace side by side with Israel on the basis of the two-state solution that fulfills the legitimate rights of the Palestinian people, in accordance with international law, is the only path to a comprehensive and lasting peace.”
Safadi warned against “the dangerous consequences of unilateral Israeli measures, such as the annexation of Palestinian lands, the building, and expansion of illegal Israeli settlements on Palestinian occupied lands and encroachments on the Holy Sites in Jerusalem, that aim at imposing new realities on the ground.” He stressed Jordan condemns such measures “as a violation of international law and provocative actions that will push the area towards more conflict and tension.”
Turkey’s Ministry of Foreign Affairs released a statement saying that “the so-called US peace plan is stillborn. This is an annexation plan aiming to destroy the two-state solution and seize the Palestinian territories. The people and the land of Palestine cannot be bought off.”
“Jerusalem is our red line,” the statement reads. “We will not allow any step seeking to legitimize Israel’s occupation and atrocities. We will always stand by the brotherly Palestinian people and will continue to work for an independent Palestine on Palestinian land.”
“We will not support any plan that does not have the support of Palestine. There will not be any peace in the Middle East without ending Israel’s occupation policies,” Turkey’s Ministry of Foreign Affairs added.