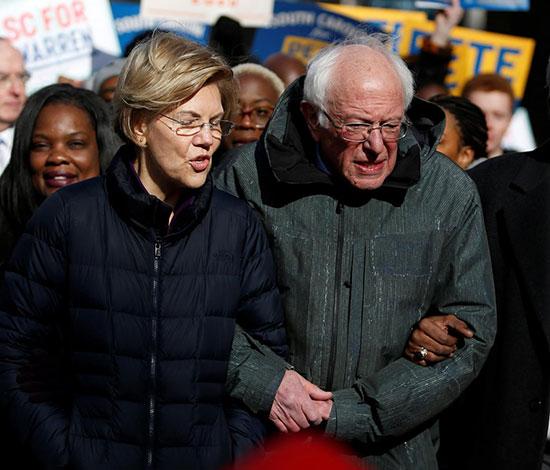 Several Democrats have called the deal ‘one-sided’ and counterproductive to peace.

By MEE staff in Washington, DC

As Donald Trump hailed his so-called “deal of the century” as a historic opportunity to achieve peace between Palestinians and Israel, Democratic members of congress poured scorn on the plan that has been rejected by Palestinians.

The proposal, which was drafted without the input of any Palestinian groups, allows Israel to keep all of its settlements in the West Bank and annex large parts of the Palestinian territories that it currently occupies.

While Trump has floated his proposal as a “realistic two-state solution”, the plan itself says a Palestinian state – if it materialises – will be demilitarised and without sovereignty over its air space and territorial waters.

In a wave of criticism, many members of Congress denounced the plan as a unilateral attempt to end the chances of real Palestinian statehood.

‘This political stunt gets us no closer to peace or justice’

Senator Bernie Sanders, who is running for president, said Washington must ensure a just agreement between Israelis and Palestinians.

“Any acceptable peace deal must be consistent with international law and multiple UN resolutions,” Sanders said.

“It must end the Israeli occupation and enable Palestinian self-determination in an independent state of their own alongside a secure Israel. Trump’s so-called ‘peace deal’ doesn’t come close, and will only perpetuate the conflict. It is unacceptable.”

“Trump’s ‘peace plan’ is a rubber stamp for annexation and offers no chance for a real Palestinian state,” she said.

“Releasing a plan without negotiating with Palestinians isn’t diplomacy, it’s a sham. I will oppose unilateral annexation in any form – and reverse any policy that supports it.”

“This one-sided proposal is a cynical maneuver calculated to be rejected by the Palestinians and then green-light illegal annexation,” Van Hollen wrote in a series of tweets.

“It undermines decades of bipartisan US policy and international law. Far from the ‘deal of the century’ this is the ‘disaster of the decade’.”

Chris Murphy, a Senate Democrat and a vocal critic of Trump’s foreign policy, also slammed the deal, saying that it compromises the long term security of both the US and Israel.

“The unilateral annexation of the Jordan River valley and existing settlements, deemed illegal under US and international law, will set back the peace process decades,” he said. “And it risks real violence and massive destabilization inside places like Jordan.”

Several Democrats in the House of Representatives also rejected the so-called “deal of the century”.

Mark Pocan, the co-chair of the Congressional Progressive Caucus, said the plan was a “massive step backwards”.

Once again, there is no peace plan without Palestinian input.

This “plan” greenlights the permanent annexation of illegal Israeli settlements in the West Bank & takes no steps towards securing peace in the region.

This is not a two-state solution—it’s a massive step backwards. https://t.co/ED31T0g1pC

Pramila Jaypal, the other co-chair of the progressive caucus, rejected labelling the proposal as a peace plan.

“It is absurd to call Trump’s plan a ‘peace plan’ when Palestinian voices were barred from the discussion,” she said.

For her part, Representative Ilhan Omar said the proposal was “shameful and disingenuous”.

“This is not a peace plan,” she wrote on Twitter. “It is theft. It is erasure.”

Palestinian-American Congresswoman Rashida Tlaib noted that the deal was released on the day that Israeli Prime Minister Benjamin Netanyahu was formally indicted on corruption charges.

“This political stunt gets us no closer to peace or justice,” Tlaib said. “As a member of Congress, I consider it a non-starter.”

Congressman Andy Levin, a Michigan Democrat, challenged Trump’s assertion that the proposal will lead to a two-state solution.

What @realDonaldTrump is proposing is a “two-state solution” in name only, not lasting peace that will protect Israel’s future as a democratic homeland for the Jewish people or fulfill Palestinians’ aspirations for self-determination.

Congresswoman Debbie Dingell, who represents a large Arab-American community around Detroit, said the plan “aggravates issues in the region” and fails to ensure a viable state for Palestinians.

“This proposal holds the potential to further the conflict and occupation and is not an earnest attempt at peace in the region,” Dingell said in a statement.