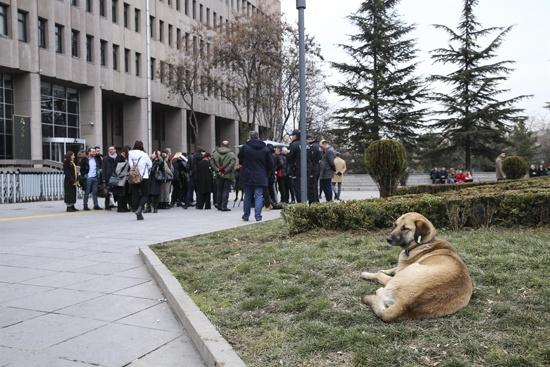 Three men on Jan. 27 were sentenced to 10 years in prison apiece for poisoning stray dogs in capital Ankara.

The decision was welcomed by animal activists watching the trial.

The indictment said the defendants killed 16 dogs in Ankara with chicken meat dipped in pesticide.

On. April 12, 16 stray dogs found dead by poisoning in a park in Batıkent suburb of Yenimahalle district.

The footage showing the dogs in agony as locals rushed to the scene caused a public uproar throughout Turkey.

An investigation found that the dogs, which were being fed by locals in the park, died due to eating poison-added chicken meat thrown out from a white automobile.

Often described as a haven for stray animals, especially for cats roaming free in its cities, Turkey occasionally faces incidents of violence, cruelty and abuse against animals.

A number of videos and images showing individuals beating, torturing stray dogs and cats, emerged in the last couple of years, has triggered widespread public outcry.

Animal activists have long campaigned for violence against animals to be defined as a crime instead of misconduct, in addition to aggravated penalties.

Existing laws only impose fines for crimes against animals.

Amid mounting pressure from the public, the Turkish government had hastily announced a new ministerial bill for animal rights, which was sent to parliament in April 2018, and vowed to prioritize it ahead of the June 24 elections last year.

One-and-a-half year on, the legislation is still yet to be adopted.

Those who dare to torture animals will receive four months to three years in prison, according to the new bill.

If the perpetrator violates the freedoms of multiple animals in the same instance, his or her sentence will be increased by one-and-a-half times, rising from six months to four-and-a-half years in jail, according to the draft.