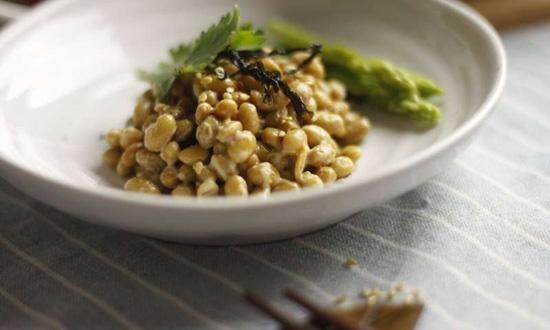 A higher intake of fermented soy products, such as miso and natto, is associated with a lower risk of death, finds a study from Japan published by The BMJ today.

However, the researchers stress that the findings should be interpreted with caution as they may have been affected by unmeasured (confounding) factors.

It is, however, still unclear whether different soy products, especially fermented soy products, are associated with specific health effects.

So a team of researchers in Japan set out to investigate the association between several types of soy products and death from any cause (“all cause mortality”) and from cancer, total cardiovascular disease (heart disease and cerebrovascular disease), respiratory disease, and injury.

Participants filled in detailed questionnaires about their dietary habits, lifestyle, and health status. Deaths were identified from residential registries and death certificates over a follow-up period of nearly 15 years.

Men and women who ate natto also had a lower risk of cardiovascular mortality than those who did not eat natto, but there was no association between soy intake and cancer related mortality.

These results persisted even after further adjusting for intake of vegetables, which was higher among those consuming larger portions of natto.

The authors point out that fermented soy products are richer in fibre, potassium and bioactive components than their non-fermented counterparts, which may help to explain their associations.

However, this is an observational study, so can’t establish cause, and the researchers cannot rule out the possibility that some of the observed risk may be due to other unmeasured factors.

They conclude: “In this large prospective study conducted in Japan with a high rate of soy consumption, no significant association was found between intake of total soy products and all cause mortality. In contrast, a higher intake of fermented soy products (natto and miso) was associated with a lower risk of mortality.”

Further studies are still required, however, “to refine our understanding of the health effects of fermented soy, and perhaps to inform the development of healthier and more palatable products,” they conclude. “These efforts should be collaborative, including not only researchers but also policy makers and the food industry.”