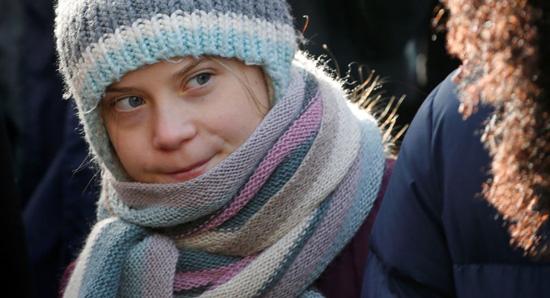 Teen climate activist Greta Thunberg, whose protests have attracted millions of people across the globe, has become an increasingly influential figurehead for youth climate activism, with many claiming to be inspired by her words and passion, while her critics perceive her as divisive and confrontational.

Teen climate activist Greta Thunberg said on Instagram on Wednesday that she has applied to trademark her name and that of the international school strike movement, ‘Fridays For Future’, that she inspired in 2018.

The move would allow her to sue people and companies for trying to misuse her name or that of the movement for commercial purposes.

“I assure you, I and the other school strikers have absolutely no interests in trademarks. But unfortunately it needs to be done,” she said on the social network.

Thunberg added she had also applied to patent “Skolstrejk for klimatet”, school strike for the climate in Swedish – the wording on the placard she held when she began her solitary protest outside the Swedish parliament in 2018.

“My name and the #FridaysForFuture movement are constantly being used for commercial purposes without any consent whatsoever. It happens for instance in marketing, selling of products and people collecting money in my and the movement’s name,” the activist wrote on her Instagram account.

Thunberg also said she was setting up a non-profit-making foundation to deal with the financial aspects of #Fridays for Future, such as book royalties, donations and prize money, emphasising it would be “completely transparent.”

“The foundation’s aim will be to promote ecological, climatic and social sustainability, as well as mental health,” Thunberg wrote.

Netizens reacted immediately, with many commenting it was “always about the money”.

​Some social media fans mocked the climate activist for her doomsday predictions.

​Others wondered who was the driving force behind her current decision to trademark her name.

​Others on social media took the opportunity to take pity on the child that they believed should be “back in school”.

​Twitter users also responded with a splurge of memes.

​Teen activist Greta Thunberg rose to international prominence in 2018 after launching a school climate strike movement, first outside the Swedish parliament and then worldwide.

On 23 September 2019 in New York, the United Nations General Assembly held the Climate Action Summit, where 16-year-old Thunberg raged at state leaders for inaction on the challenges of climate change, berating them for “having stolen her dreams and her childhood”.

The address went viral, spreading across social media platforms and sparking a heated debate that split netizens and officials.

Thunberg was named Time magazine’s person of the year for 2019 – the youngest person to have ever received the accolade.

However, the “Greta phenomenon” has attracted plenty of critics, too, as some perceive her drive to hold world leaders to account as confrontational and divisive.