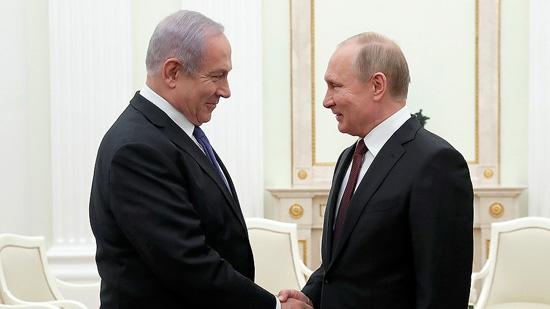 Israeli Prime Minister Benjamin Netanyahu is going to Russia after unveiling a peace proposal alongside US President Donald Trump in Washington. The ‘Deal of the Century’ was met with skepticism and outrage around the world.

The caretaker prime minister was in Washington, DC on Tuesday alongside his chief rival, retired General Benny Gantz, as Trump unveiled his controversial “Vision” that included a two-state solution, Israeli control of Jerusalem and no right of return for Palestinians.

Netanyahu’s office said he would return from Washington to Tel Aviv via Moscow, something that was previously not included on his official itinerary.

Revealing the Moscow stopover, Netanyahu said he intended to inform Russian President Vladimir Putin about Trump’s peace proposal. Russia has refrained from commenting on the proposed peace deal until the government can familiarize itself with its details. The 180-page document was made public on Tuesday evening Moscow time.

Russian policy on the Israeli-Palestinian peace settlement has been supportive of a negotiated two-state solution within the framework of UN resolutions and international law, which has often put it at odds with Washington, though Moscow has maintained cordial relations with Tel Aviv.

“We haven’t seen it,” Foreign Minister Sergey Lavrov said on Tuesday, even though Russia is part of the ‘Quartet on the Middle East’ with the US, UN and EU that has been seeking peace in the region since 2002.

“In our contacts with the US, they did not give us any details,” Lavrov told reporters. “Once the text is made public, the main thing will be to find out the position of the two sides, most of all that of the Palestinians.”

Deputy Foreign Minister Mikhail Bogdanov, who also serves as Russia’s special envoy to the Middle East, said that both Israelis and Palestinians “need to enter into direct negotiations and reach a mutually acceptable compromise.”

We don’t know whether the US proposal is mutually acceptable or not.

Early reactions from Palestinians across the political spectrum, from President Mahmoud Abbas to Hamas, suggest the latter. Abbas has condemned the plan as a “conspiracy” that makes impossible demands of his people.

Moscow has previously criticized the economic portion of the US proposal, which was unveiled in June 2019 in Bahrain, with Lavrov accusing Washington at the time of wanting to impose an “alternative vision” of the Israeli-Palestinian settlement that would depart from the international legal framework – just as the Trump plan does.

Putin was in Israel just last week, speaking at a Holocaust memorial conference at Yad Vashem, and unveiling a monument to the victims of the Siege of Leningrad. He also visited Bethlehem, where he met with Abbas, presumably to discuss the upcoming US peace initiative.

As far as Israeli news outlets are concerned, Netanyahu’s real mission in Moscow is to secure a pardon for Naama Issachar, an Israeli citizen serving a lengthy sentence in a Russian prison on drug charges. Issachar was indeed pardoned by Putin on Wednesday.

Netanyahu’s return to Israel will not be quite triumphant, however, as he was officially indicted for corruption mere hours before the ceremony in Washington. He remains a caretaker PM pending a new general election in March. The two previous votes resulted in a deadlocked Knesset, with no party able to form a governing coalition.