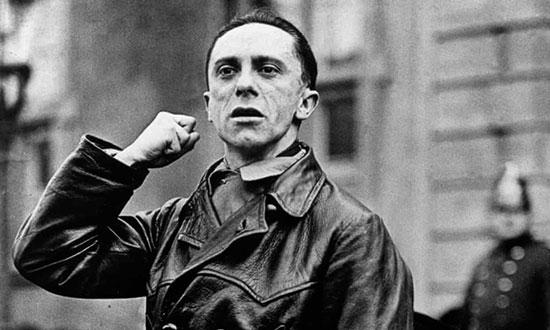 Die Zeit article finds that Alfred Bauer, after whom award is named, was high-ranking Nazi

Andrew Pulver and Kate Connolly in Berlin –  The  Guardian

Josef Goebbels set up his Reichsfilmintendanz in 1942 to control the cinema industry, and Bauer appears to have been a key member. Photograph: Alamy

The Berlin film festival has suspended one of its major prizes after revelations that its founding director, Alfred Bauer, after whom the award is named, was an active high-ranking Nazi who was closely involved in a propaganda organisation set up by Josef Goebbels.

Bauer’s controversial past was revealed in an article in Die Zeit, which uncovered historical research suggesting that Bauer was both a member of the Nazi party and a member of the SA, the Nazis’ pre-war paramilitary wing. Bauer also appeared to be a key part of Goebbels’ Reichsfilmintendanz, a body established by the propaganda ministry in 1942 to control the cinema industry.

In one report drawn up on him for the Nazi party, Bauer was described as an “enthusiastic SA man” whose “political attitudes are impeccable”.

He was appointed as the first director of the Berlinale in 1951, holding the position until his retirement in 1976.

Die Zeit’s investigation drew on documents found in the National Archives, and Berlin’s city archives, according to which Bauer was responsible for spying on actors, directors and other members of the film industry. He is believed to have systematically destroyed all traces of his Nazi past after the war. Bauer was responsible for decisions such as who received assignments to film, and who would be sent to the front to fight.

According to Die Zeit’s research, Bauer went to great efforts to create the impression that he had been a quiet opponent of the Nazi regime. He made frequent false statements about the roles he had had during the war, and managed to cover up that he had been a paid up member of the National Socialist party.

The revelation, coming just days before the opening of the 70th festival, is of huge embarrassment to the Berlinale, which has always held Bauer in high regard, naming one of its most important prizes after him in 1986, after Bauer’s death. The prize celebrates filmmakers who open up new perspectives in the art of cinematography.

In a statement on social media the festival said: “The interpretation of these sources suggests that [Bauer] had held significant positions during the Nazi era. In view of these new findings, the Berlinale will suspend the Silver Bear Alfred Bauer Prize with immediate effect.

“We welcome the research and its publication in Die Zeit and will seize the opportunity to begin a deeper research on the festival history with the support of external experts.”