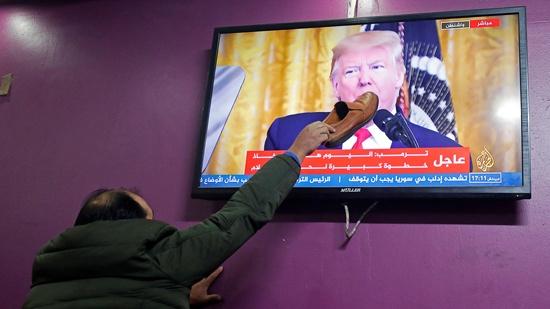 After three years of being in the works, led by US President Donald Trump’s son-in-law and senior adviser Jarred Kushner, the administration’s plan for a settlement between Israel and Palestine was unveiled in Washington D.C. on January 28, with a press conference attended by Israel’s embattled Prime Minister Benjamin Netanyahu, who along with serious corruption charges, is preparing to fight a third general election in one year. Palestine was not represented in the room. Satirist Karl Sharro, perhaps aptly reviewed the ongoing situation: “Middle East peace plans are my favorite genre of Western fiction,” he quipped.

President Trump, before the presentation of the ‘deal of the century’, had lined up both Netanyhu and Benny Gantz, the Israeli opposition to Netanyahu and prime ministerial candidate, both endorsing the plan in hopes to use the same to fracture the conservative votes back home to their respective vantage points. While Gantz is not similar to Netanyahu when it comes to ideology, he has also thrived to make inroads into that particular electorate in attempts to capitalize on a growing discontent against the current leadership. Both Gantz and Netanyahu have said they will implement the plan.

Throughout the document and the representation of the same, Palestine almost seems incidental to what Trump has put on the table. This, of course, goes beyond the point that any such deal was to be declined by the Palestinians to begin with. The plan, banking heavily towards the Israeli side, allows Jerusalem to spill over into Palestinian territory as part of a two-state deal which now, under the current document and the accompanying maps, comes off as a one state solution with added benefits for the Palestinians.

A deeper dive into the document itself showcases the very corporate structure of the presentation of the plan itself, peppered with construction projects masquerading as economic plans, and a map showing revised Palestinian territories in these new forms that are perhaps smaller than many golf courses owned by Trump, but housing around 5 million people. Construction of hotels and resorts, Free Trade Agreement (FTA), ports, an airport, global marketing campaigns for Palestinian culture and identity, mortgage lending ecosystem and so on are on offer. The deal highlights the likes of Singapore as a model of development and prosperity, a comparison almost comically naïve considering the depth and ingrained history of the crisis itself.

The Trump offer, more than an attempt to correct historical, religious and regional fallacies that emit both from Middle East’s own disjointedness on the issue of Palestine, American foreign policy’s interventions on the same since 1948 and the formation of the state of Israel primarily builds rapprochement between warring Israel politics, and between Israel and the US. While the echoes of a non-negotiable clamp down on terrorism in the region is fully endorsable and acceptable, how this particular document and its offerings help bring that to fruition is baffling. In fact, more than anything else, the plan’s design resembles more of a repeat of the 1917 Balfour Declaration, authored by former British Prime Minister Arthur Balfour which supported the development of a national home for the Jewish people in Palestine. How a new version of the previously problematic political re-organizing of the Middle East by Western powers is expected to quell the Palestinian cause, and the extremist and terror groups riding on the coattails of the same, remains unresolved. In the coming weekend, Israel is expected to begin the annexation of Jewish settlements in the West Bank and parts of the Jordan Valley, now in low tones backed by the White House. Jerusalem will also maintain security control in this region, which can also significantly uptick tensions between Israel and Jordan. Both, are allies of the US.

One surprising point to note (amongst many) during the press interaction by Trump and Netanyahu was the presence of ambassadors of Oman, Bahrain and the UAE. Trump briefly lauded their company in the room, all three countries as of today do not recognize Israel as a legitimate state, however, things have been broadly changing in the Arab – Israeli relations. UAE is on its way to get its first synagogue in 2022, Bahrain in June last year for the first time officially allowed Israeli journalists to take part in a conference, and in October 2018 Netanyahu paid a surprise visit to Oman, an Arab state playing the role of a Switzerland in the Middle East, walking the neutral line in regional conflicts. This was the first trip by an Israeli prime minister to Oman since 1996. An Arab – Israel rapprochement, is underway.

The current geo-political mix in the Middle East, and bridge building between the Arab world and Israel sped up by a common threat factor in Iran and its notable successes over the past few years in expanding its influence across Syria and Iraq perhaps overshadows the long-drawn Palestinian crisis, and the Arab states at some level expect the status quo of the same to be linear in the time to come, a Trump deal or non-deal not withstanding. This is also a good time to highlight the very fact that Arab states themselves have supported the Palestinian cause as per the convenience of their own domestic and/or foreign policy narratives and a renewed interest may be led by a reinvigorated asymmetric war campaign by Iran via the likes of Hezbollah and Hamas, which is widely known to have been backed by Iran. Adding another marker, the cracks in the Gulf Cooperation Council (GCC) between UAE, Saudi and Qatar also adds an interesting dimension, with Doha increasing its outreach to Palestine by committing $480 million to its development as it sought shelter by being nearer to Iran and Turkey as Riyadh and Abu Dhabi orchestrated a blockade against it. This is just one of the many illustrations of how the Palestine issue has been played out via a policy of ‘tiki taka’ amongst the Arab states themselves as well.

Despite the Israel friendly deal, major Arab capitals put their weight behind it including Egypt, which said it appreciated the continuous efforts to bring peace in the conflict. The architect, Jared Kushner, has marketed the plan as the best opportunity for the Palestinians to get a worthy settlement, but mostly on American and Israeli terms. A ‘take it or leave it (and suffer the eventualities)’, if you may. Mahmoud Abbas, Palestinian president, has already called the regional Arab support roving around the deal as a “conspiracy”.

Even New Delhi chimed in, but only when prodded, with the spokesperson for the Ministry of External Affairs answering to a media question raised on the issue. In true form of historically balancing the line in the Middle East’s quagmires, the Indian statement both said something while saying nothing.

“As you are aware, India has been consistently supportive of the Palestinian cause. India has also called for a two-State solution to the Israeli-Palestinian issue. We reiterate our view that the final status issues should be resolved through direct negotiations between the two Parties and be acceptable to both. We urge the Parties to engage with each other, including on the recent proposals put forward by the United States, and find an acceptable two-State solution for peaceful coexistence. We will continue to follow developments in the region and engage with the Parties concerned,” the Indian statement read. President Donald Trump is expected to visit India in February.

The fact that, barely a day after Trump presented the deal, it has already dropped out of the global news cycle, considering the magnitude of the issue and the Israel – Palestine problem being at the core of regional battles, the plan perhaps has already faltered at the box office. More than the Palestine issue, the deal of the century was more a play by Trump for his legacy. Prior to this, the president went out of the way to attempt and address other big American foreign policy conundrums in North Korea and Iran. ‘I was not elected to solve small problems,’ Trump said. However, in an American and Israeli election year, even a futile and simplistic compromise masquerading as a ‘deal of the century’ may go a long way with the president’s voter base at home along with allies in the Middle East trying to protect their American security blanket. Palestine, like always, comes out as the pinball of the region.