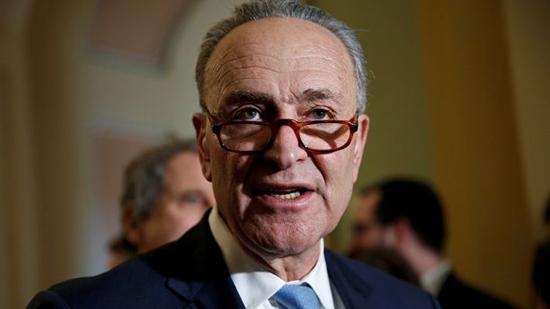 Schumer, joined by Harris, Sen. Sherrod Brown, D-Ohio., and Sen. Patty Murray, D-Wash., held a press conference on Friday as Democrats continued to pressure Senate Republicans to allow additional witnesses to give their testimony. But as a reporter began asking a question to the lawmakers, Harris was seen having a good chuckle with her Ohio colleague, prompting the minority leader to halt Harris’ laughter.

Harris responded with a facial expression of her own.

The moment was shared on social media, and immediately sparked criticism and mockery against the Senate Democrats.

“Remember: Democrats said that #impeachment was ‘sad’ and ‘somber.’ Did Senator Harris not get the memo?” the House Oversight Committee Republicans official Twitter account wrote.

“When you worked really hard on the presentation but the rest of the team that didn’t do any work won’t stop giggling behind you,” former McConnell creative director Anang Mittal reacted.

“Chuck Schumer, quite literally, wants Kamala Harris to curb her enthusiasm,” The Daily Wire wrote on Twitter, sharing an edited version of the clip that included the theme music from Larry David’s “Curb Your Enthusiasm.”

The moment had already inspired a gif.

On Thursday night, Democrats had sparked another viral moment when Rep. Jerrold Nadler, D-N.Y., appeared to steal the podium from leading House impeachment manager Rep. Adam Schiff, D-Calif., at the end of the second day of questioning by the Senate jurors.

After Chief Justice of the United States John Roberts read the last question for the House managers, Nadler was seen jumping out of his chair and rushing to the center podium, quickly getting the attention of Schiff, who also leaped from his seat.

“Jerry. Jerry. Jerry,” Schiff is heard saying as he took a few steps towards Nadler, but failed to stop him from speaking.

The moment also sparked plenty of laughs on social media.