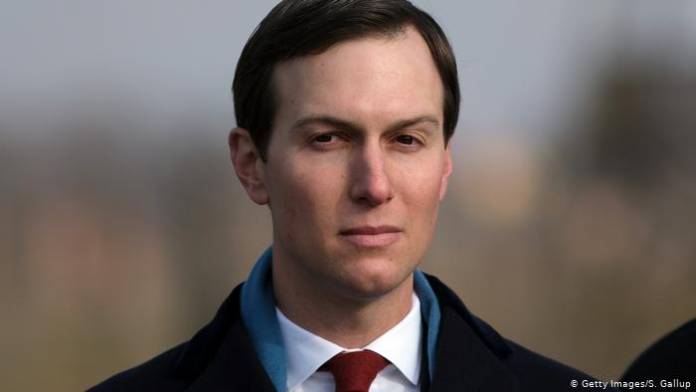 Kushner says of Erekat, “the guy has a perfect track record of failing at making peace deals.” US and Israel to begin annexation preparations within weeks.

By CARMEL MADADSHAHI, TOVAH LAZAROFF   –  The Jerusalem post
Palestinians can weigh in on the “Deal of the Century” map, US envoy Jared Kushner told the Egyptian MBC Masr network in an interview, where he also spoke of the Trump administration’s plans to recognize Israeli settlements in the West Bank.

“If the Palestinians don’t like where the line is drawn, they should come and tell us where they want to draw it,” Kushner told Egyptian anchor Amr Adib.

“If the leaders of the Palestinians want to do what is best for their people, I think they will read the plan,” Kushner said. “They should come to the table, sit with the Israelis and say: ‘Look, We appreciate the gesture you have made. There are some major compromises [in the plan] you have never made before. These are the four or five or six things that we would like you to consider changing. And if you do this, you have a deal.’ That is how people who are ready to have a state make deals,” Kushner said.

He explained that in the coming months, the US and Israel would be finalizing the details of the map which the Trump administration published last Tuesday. It gave 30% of Area C of the West Bank to Israel and 30% to the Palestinians. But the Palestinians can only have that land if they agree to enter into US-led talks based on the peace plan which the White House unveiled last week.

The US has set out a four-year period to arrive at a two-state resolution to the Israeli-Palestinian conflict. During that time, Israel can apply sovereignty over the 30% of Area C allotted to it under the plan, but only if it agrees not to expand existing settlements or create new ones in the 30% of Area C allotted to the Palestinians. All Israeli settlements could be annexed under this plan.

Israel had initially believed it could apply sovereignty immediately. But the US has asked it to hold off for a number of months, a move that would mean no action could take place prior to the Israeli March 2nd election. Kushner who is the main architect of the plan, explained that the map which was initially presented was conceptual and not technical.

“We are trying to make a deal with Israel. It will take us a couple of months to go through some of the land and to figure how we turn this into a technical map, this is a concept map. You have to go over every road, every hill and every inch. Then what we want to do is to see if we can recognize that land and this is all land that they are never going to leave anyway,” Kushner said in the interview.

Kushner lauded Palestinian Authority President Mahmoud Abbas, but made general attacks against the PA leadership, particularly its chief negotiator Saeb Erekat, explaining that the PA has a 20-year track record of missing every opportunity and a zero success rate.

“In my business, when someone tries to do business for 20 years and fails, he is replaced by someone else,” Kushner said in the interview.

Kushner said of Erekat: “He has been the top negotiator for 25 years and he hasn’t made a deal. Second of all he says a lot of things that turn out to not be true, so just because he says it, the people should not assume that it has any authority whatsoever. The guy has a perfect track record of failing at making peace deals.”

He charged that the Palestinian Authority did not want to make a deal with Israel just so its leaders could continue to receive massive amounts of international donor funds.
“There is a lot of wealth at the higher levels [PA leadership], people are rich, their families are rich, their friends are rich, so why would they want to make a deal? Then the money stops coming in,” Kushner said.

Kushner spun a vision of a future in which Israel would have normalized ties with the Arab world, noting that when that happened, Arab worshipers from all those countries could visit Jerusalem’s Al-Aqsa Mosque.

He concluded the interview with a hope for success, yet emphasized that in order “to move forward both sides have to make concessions,” and end the status quo which has been terrible for the Palestinian people leading to radicalization.

Erekat tweeted in response: “If Mr. Kushner says PM Netanyahu is allowed to annex Jerusalem, settlements, Jordan Valley, Dead Sea, have security control west of the Jordan river, control Palestinian airspace, territorial waters, no [harbors], refugees off the table. What is [there] to negotiate?”