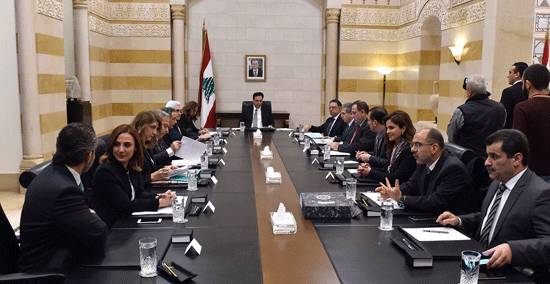 The ministerial panel drafting the new government’s Policy Statement will hold a “final reading” session on Monday after the draft was distributed to all ministers, media reports said.

“After the finalization of the draft in Monday’s meeting, a cabinet session will be scheduled to be held at the Baabda Palace under President Michel Aoun to approve the statement in its final version,” An-Nahar newspaper reported on Sunday.

As for the content, the panel has opted to use the same clauses contained in the statement of Saad Hariri’s government regarding “the sensitive political topics related to the resistance and the dissociation policy,” the daily added.

The bulk of the statement will meanwhile be dedicated to the financial and economic crises.

“The government will commit itself to a three-stage integrated economic and reformist vision with timeframes ranging from a 100-day short-term stage to mid- and long-term stages that would be implemented over several years with each entailing specific steps and measures,” An-Nahar said.

It also noted that parliament is not expected to hold a session to debate the statement before February 10.

Cher accuses Trump of ‘doing anything he can to steal election,’ warns voters