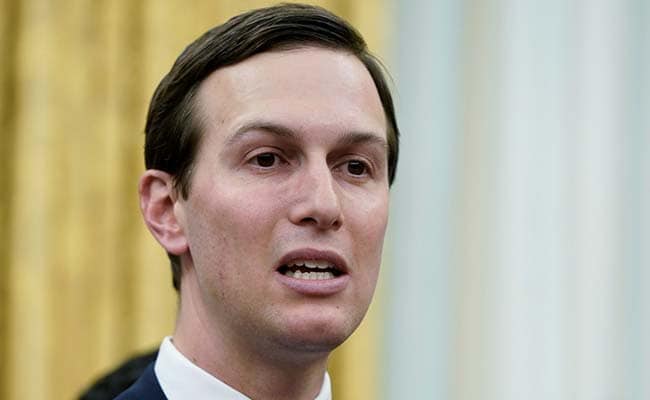 During an interview with an Orthodox weekly, Kushner revealed the president asked him to spearhead the effort for Israeli-Palestinian peace during the transition based on his real estate experience.

Jared Kushner didn’t realize his father-in-law was serious about running for president until Donald Trump asked his daughter Ivanka, Kushner’s wife, to help launch his campaign.
That’s one revelation in Kushner’s exclusive interview with the Orthodox weekly Ami Magazine about his role in the Trump administration. We took a look at the full interview (available only in print or online with a subscription) and five things stood out.
Kushner didn’t know he’d be working on a peace plan, either
Apparently the president asked Kushner to spearhead the effort toward Israeli-Palestinian peace during the transition based on his real estate experience. As Kushner told Jake Turx, Ami’s senior White House correspondent:
“We talked a lot about our deals. Whenever I made a good deal he would say, ‘I would have loved to have done that. How’d you do it?’ He would always joke about how I got a lot of deals that other people might not have. He just threw me into it.”
Jerusalem, the undivided capital
During the announcement of his Middle East proposal, Trump said that under his plan, Jerusalem will “remain Israel’s undivided capital” but that a Palestinian capital will be located in east Jerusalem, seemingly altering the historical position of the United States.
Kushner elaborated:
“If you look at the municipal boundary of Jerusalem, it’s very different from the way it was in 1967, and I believe it’s possible to say that the part of Jerusalem Israel will retain as an undivided city in the context of the people to whom that statement is important.
“It’s also possible that a portion of what is technically the municipal boundary of Jerusalem in east Jerusalem can become the capital of a Palestinian state. But becoming the capital of a state isn’t something that’s based on a religious claim, it’s just a claim they put in their charter back when they formed their organization. When Jordan controlled the West Bank, its capital was Amman, not east Jerusalem. When they relinquished that claim and the Palestinians took over, they created a new claim that they wanted to have their capital in east Jerusalem. The world signed on because people said, ‘Why not?’”
He then clarifies: “It means that the portion that would be in Israel’s control is an undivided capital of Jerusalem.”
Ivanka might have written that famous escalator speech
Who can forget Trump’s grand escalator slide into the 2016 presidential race — and the colorful speech that followed?
Kushner suggested that Ivanka Trump wrote it.
“We thought [Trump] was pretty serious in the lead-up to the [2016] election, which we knew for sure when he asked Ivanka to write a speech for his official announcement,” he told Turx.
“So he never sat down and told you he was running; you just figured it out when he asked your wife to write that speech,” Turx said he responded.
“Yes. I believe we got together on a Sunday for lunch.”
He’s ready to talk tachlis — after the Israeli elections
Kushner told Turx that he’s ready to start working on a “technical map” of the peace plan — in his words, “going line by line and street by street to decide where to put the borders” — as soon as Israel has settled its third round of elections in less than a year. The vote is in March.
Later Kushner explained why the details matter so much to him.
“When you disagree about a concept, you have to figure out the details and then figure out what’s the bid and what’s the ask — the unbridgeable factors,” he said. “If I can take a big conceptual gap and narrow it down to a few technical details, it’s much easier to find a compromise.”
He’s still wearing a red string
In kabbalah, or Jewish mysticism, wearing a thin red string around the wrist is said to ward off bad luck. Kushner and Ivanka Trump, not to mention celebrities like Madonna, have been spotted wearing the talisman before. According to this interview, Kushner is still maintaining the practice — and his kids are now, too.