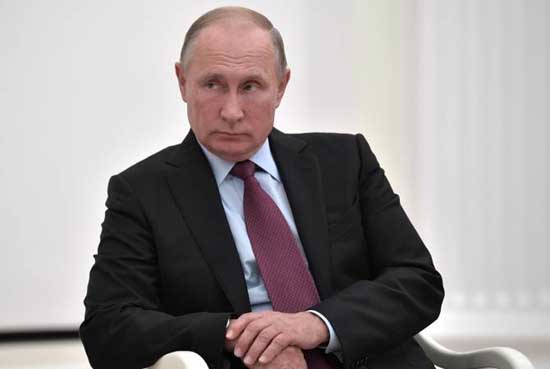 (RFE/RL) — When President Vladimir Putin dropped his bombshell announcement calling for changing Russia’s constitution, the immediate focus was on what it meant for his future.

Several amendments he submitted to parliament days after his January 15 national speech called for rearranging Russia’s power structure. They also give him options should he seek to retain power after 2024, when he is barred from running for reelection.

Those proposals were quickly taken up by a 75-member commission, which was established to draft amendments, and given preliminary approval by the State Duma, the lower house of parliament.

But other proposals have floated through Kremlin halls and elsewhere in Moscow. More than 300, in fact, some of which will presumably make it into the biggest update yet of the post-Soviet constitution that Russia adopted in 1993.

Not all of them are known to the public, and some are unusual from the standpoint of constitutional law.

Depending on how many are approved, it could result in a constitution that is enormously complex, addressing issues as wide-ranging as who can marry whom and how to address Moscow’s role in the defeat of Germany in World War II.

A crucial second vote in the Duma – which is scheduled for February 11 but may be postponed for weeks – should provide more clarity as to what is actually under final consideration.

Here’s a look at some of the other proposals that have bubbled to the surface since the first vote in the Duma.

The Soviet role in the defeat of Germany has long been a hallowed moment in Russian history; no other country suffered the human or industrial loss that the Soviet Union did.

But reverence for what’s called the Great Patriotic War has taken on increasingly political hues in the eight years since Putin returned to the presidency – and particularly since 2014, when Russia seized Ukraine’s Crimean Peninsula.

The Culture Ministry has funded lavish war epics airbrushing parts of wartime history. The Kremlin has bristled at any suggestion that Josef Stalin’s Soviet Union shares equal blame with Adolf Hitler’s Germany for the outbreak of the war.

Russian officials have also tried to cast the notorious Molotov-Ribbentrop Pact — which dismantled Poland and carved up Eastern Europe between Berlin and Moscow — as a triumph of Soviet diplomacy.

And Moscow has also sought to counter criticism of the decades of postwar Soviet police-state dominance that succeeded German control over Eastern Europe.

Aleksei Pushkov, a member of the upper house of parliament and a vocal critic of the West, has proposed rewriting the constitution’s preamble to include the words “victorious power.”

“I would note in one way or another our victory in World War II, our status as a victorious power, because this defines our existence: both domestic and international,” Pushkov said.

It’s not clear what writing those words into the preamble would in fact do from a legal standpoint.

But proposals that would criminalize the denial of the Soviet role in the war have been circulating for more than a decade. In 2014, the country’s Criminal Code was even amended to include this clause.

The “victorious power” proposal also fits into the tone the Kremlin is setting for the 75th anniversary of the defeat of Germany. Russian officials are planning elaborate ceremonies for the May 9 events in Moscow.

Snarky Star Wars references aside, the proposal to include the phrase “supreme leader” in the constitution could hint at a shift in the fulcrum of Russian political power away from the presidency — right around the time Putin has to prepare to leave that post.

Pavel Krasheninnikov, chairman of the Duma committee that oversees the drafting of legislation, told the official government newspaper Rossiiskaya Gazeta that the scores of proposals received included one to create an official post of “supreme leader.”

It’s not without precedent. During the chaotic period after the 1917 Bolshevik Revolution and the Russian Civil War, Aleksandr Kolchak, a Russian naval admiral, briefly held the title of “supreme leader” as he led an anti-Bolshevik government in Siberia. After being captured and turned over to Bolshevik forces, he was executed in 1920.

Despite holding near absolute power at the peak of his leadership of the Soviet Union, Stalin was never granted the title of supreme leader, though he was called generalissimus.

Writing the title “supreme leader” into the constitution would lay the groundwork for a position whose authority exceeds that of the president. And that could dovetail with the ongoing discussions about what role Putin may have at the conclusion of his current six-year term in 2024.

This time, the origin of the proposal has not been revealed. Asked if Putin had an opinion on it, Kremlin spokesman Dmitry Peskov declined to say, choosing to cast it as one of many ideas being offered up for discussion.

God (And The Constitution)

The Russian Orthodox Church has made a resounding comeback after decades of neglect and persecution under Soviet atheism. Putin has embraced the church, in part because its willingness to provide moral or spiritual justification for social policies.

On February 1, the head of the church, Patriarch Kirill, called for writing the word “God” into the constitution.

“Let us pray, let us work hard so that our founding law includes mention of God,” he said. “Because most Russian citizens believe in God.”

“I am not talking only about the Orthodox [Christians]. I am also talking about Muslims and many, many others. If the words ‘God’s storied native land’ can be in the national anthem, why can this not be said in our constitution?” he said.

While a growing number of Russians consider themselves Orthodox Christians, and church attendance is increasing – though still relatively small – this change would likely cause alarm among citizens who fear that the Russian Orthodox Church is gaining too much clout.

The existing constitution says outright that Russia is a secular state and that “no religion may be established as a state or obligatory one.” So, including an explicit mention of “God” would be a major change.

Putin, who has pointed to the Russian church as a source of moral guidance for Russians and is shown on state TV at church on major holidays like Christmas and Easter, made no mention of the issue in his speech.

Konstantin Remchukov, a journalist and commentator on the Moscow radio station Ekho Moskvy, offered what seemed to be a tongue-in-cheek counterproposal.

“The [constitution] should include everything that has a place in our lives,” he said. “If we have a place for both God and the Devil, then we should write: there is a God and Devil.”

Shortly after Putin was elected to his current term in 2018, parliament, with the Kremlin’s blessing, pushed through substantive reforms to the pension system. The system retains many of the Soviet-era elements, including a relatively low working age for qualifying, something that experts had warned was a coming fiscal train wreck.

Putin seems to have gotten the hint.

In his state-of-the-nation speech, Putin proposed writing into the constitution the “regular indexation of pensions” and ensuring the national minimum wage always exceeds the poverty line.

To be sure, both of these things are more or less already codified in existing Russian law, so including them in the constitution has been seen as more of a political display.

And the current constitution already includes explicit mention of some social welfare policy, including a guaranteed minimum wage, state support for families, for the disabled, for the elderly, and other things.

From a fiscal perspective, most experts consider it unwise, in any constitution anywhere, to set in stone a policy that could cause budget problems in the event of recession or something similar.

Russian gays and lesbians have had faced growing problems, particularly since Putin signed a law in 2013 that was officially called “For The Purpose Of Protecting Children From Information Advocating For A Denial Of Traditional Family Values” — known informally as the “gay propaganda law.”

Putin himself has insisted Russia tolerates gays and lesbians, but he has also supported measures that would ban adoptions by gay and lesbian couples.

Since 2013, conservative lawmakers, with vocal support from the Russian Orthodox Church, have vocally criticized gay and lesbian groups, and tried to push similar restrictive measures.

Same-sex marriage is not legal under Russian law. Pyotr Tolstoi, a conservative Duma lawmaker who recently became a vice-president of the Parliamentary Assembly of the Council of Europe (PACE) , called for adding a stipulation to the constitution that marriage should only be between a man and a woman.

“We can and should address the fact that family and marriage are relations between a man and a woman,” Tolstoi said. “If it is fixed at the constitutional level, this will remove a number of questions that they are trying to ask us in the European Union.”

That’s a reference to frequent criticism voiced in several European capitals about Russian discrimination against gays and lesbians.

Tolstoi wasn’t the first lawmaker to float the idea: Andrei Klishas, a member of the upper chamber, endorsed the idea a few days earlier, as did Konstantin Malofeyev, a billionaire businessman known for his advocacy of conservative and Orthodox ideals.

Still, it appears unlikely that the “marriage-is-between-a-man-and-a-woman” proposal will make into a final amendment.

Other proposals that have been put forth include:

RFE/RL journalists report the news in 21 countries where a free press is banned by the government or not fully established.