“No confidence,” chanted some of the protesters outside Parliament.

Anti-government demonstrators throw stones toward riot police during a protest against a parliament session for a vote of confidence for the new government in downtown Beirut, Lebanon, Tuesday, Feb. 11, 2020. (AP Photo)

84 lawmakers made their way to Parliament, with 63 MPs voting in favor of Diab’s government and its policy statement.

Speaker Nabih Berri kicked off deliberations over the new government’s policy statement Tuesday noon despite accusations that the number of lawmakers fell short of the required quorum when the session began.

As protestors clashed with security forces outside Parliament, Diab took center stage, outlining his government’s policy statement and vowing to implement reforms, a recurring theme with previous governments that have failed to deliver on the promises of their own policy statements.

As the session kicked off, Berri stopped short of confirming the number of lawmakers present, gesturing to Diab to read out his government’s policy.

“I spoke with former Prime Minister Saad Hariri and members of the Lebanese Forces who told me they’ll be joining us, ” Berri said.

Kataeb leader and MP Sami Gemayel blasted the move, labeling it a blatant “violation of Lebanon’s constitution” while calling on his fellow lawmakers to boycott the session.

“Initiating the session without a quorum is unconstitutional and represents a blow to Lebanon’s democracy,” he tweeted.

An hour before Berri kicked off the session, LF member Strida Geagea maintained that her party would only participate once the quorum was secured.

“In line with our beliefs, we will not secure the quorum,” she said, before joining the session shortly after.

Following Diab’s closing remarks, Berri sought to quash the accusations claiming that 67 lawmakers were present once he kicked off the session.

As lawmakers began making their way to Parliament, clashes broke out between Lebanese protesters and security forces near the parliament building in central Beirut.

The meeting is being held amid a crippling economic and financial crisis, Lebanon’s worst in decades. Police threw a tight security dragnet around the area, and special forces and riot policemen quickly opened roads that were closed by protesters trying to prevent Cabinet ministers and legislators from reaching parliament.

“No confidence,” chanted some of the protesters while others carried held signs blasting officials.

Lebanon has been gripped by anti-government protests since October. Demonstrators are calling for sweeping reforms and an end to a political class they deem as corrupt and incompetent, blaming it for the rapidly worsening financial crisis. The protests forced the resignation of the former prime minister, Saad Hariri.

The new government’s policy statement includes a rescue plan to try to get Lebanon out of its economic and financial crisis, the worst since the end of the country’s 1975-90 civil war.

A group of protesters surrounded the car of one Cabinet minister, Demianos Kattar, as he was on his way to the nearby government headquarters, pelting it with eggs pounding it with their fists before an army and police force pushed them away.

Salim Saade, a prominent member of Lebanon’s Syrian Social Nationalist Party who’s serving his third term as a lawmaker, had his car pummeled with rocks and windows smashed. He was injured in the attack and transported to a nearby hospital.

Security forces fired tear gas in another street leading to parliament, where protesters were able to remove part of a giant concrete wall. In other streets, troops forced protesters from the middle of the street to allow traffic to flow.

The policy statement includes an “emergency rescue plan” and outlines reforms in the judicial, financial and administrative fields.

Lebanon has one of the highest debt ratios in the world, standing at more than 150 of the GDP and worsening over the past years with no economic growth and high unemployment. 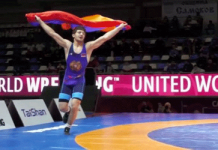