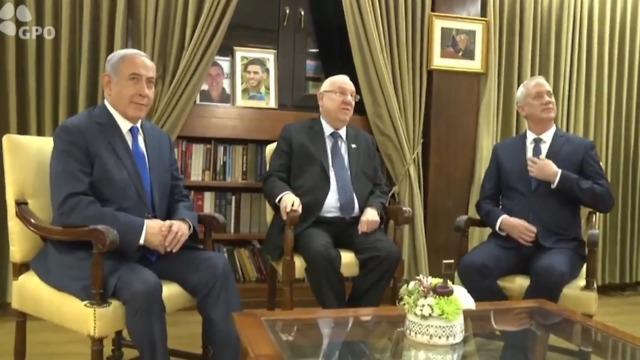 The Jerusalem Post has reached out to both Gantz and Netanyahu to participate in an all english-speaking debate.

Prime Minister Benjamin Netanyahu invited Blue and White leader Benny Gantz to debate him on television in an interview on Tuesday night on Channel 20.

“Let’s tell the truth without teleprompters about what we have done for Israel,” Netanyahu said. “Let’s do a few debates, like in the US, one each on diplomatic, security and economic issues.”

A source in Blue and White called the debate challenge “political spin intended to distract the public from the announcement of a date for the start of Netanyahu’s criminal trial.”

The prime minister said Gantz was afraid to face the judgment of the public.

Gantz responded on twitter, saying that Netanyahu was afraid to face the judgement of a literal judge and jury, asking “what happened, Netanyahu? Are you alarmed that there is a date for your confrontation with the prosecution witnesses, so you create a spin?”
Gantz proceeded to remind his followers of the trial date, which was also announced on Tuesday evening, saying that “on March 17, you go to court and the State of Israel must move forward.”

Netanyahu debated then-prime minister Shimon Peres ahead of the 1996 election and Yitzhak Mordechai, who was one of his challengers in the 1999 election. But despite his reputation for bringing American-style politics to Israel, Netanyahu has refrained from holding formal debates against political opponents since then.

Gantz declared ahead of the April election that he was willing to hold “any debate” with PM Netanyahu “at any place.” Netanyahu responded then that the only debate that would happen would be in court, because he intended to sue Blue and White’s leaders.

“They accused me of betrayal,” he said. “They enter politics and hit a low immediately. I will sue all of them.”

The Jerusalem Post has reached out to both Gantz and Netanyahu to participate in an all english-speaking debate.

Channel 13 news also offered to hold a televised election debate to take place at News 13 Studios this Sunday. The debate would be broadcast at peak time – 8:00pm – during either the main news edition or prime time, and be moderated by the main presenter of News 13.

“It is absolutely right for the prime minister to debate Gantz,” Zohar said. “I know he hasn’t wanted to debate in the past, but he is the underdog now. A debate would show the voters his verbal advantage and superior knowledge. He will beat him easily.”

Idan Zonshine contributed to this story.