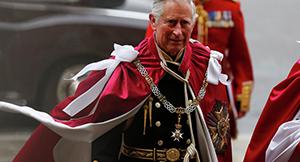 The suspect, who is believed to have mental health problems, was reportedly on foot in The Mall area of the UK capital when police searched him late on Thursday.

A man reportedly in possession of a crossbow, 14 bolts and a large knife has been arrested outside Prince Charles’ London residence, St. James’s Palace, according to The Sun.

Andrew Marshall, 44, from Nottingham, was walking in The Mall area when he was allegedly stopped and searched by police, who then used keys found on him to access a vehicle in the palace car park.

It is believed the weapons were discovered inside the car, along with a pair of latex gloves.

According to the publication, the man, who was arrested and charged with two counts of weapon possession in a public place, is suspected to have mental health issues.

The publication added the suspect, who has yet to enter a plea, has been bailed by Westminster JPs to Southwark Crown Court on the condition that he remains in hospital until his next appearance on 19 March.

Earlier, a spokesman for the Metropolitan Police was reported by MailOnline as saying on Thursday night he was not aware whether a man had been charged with weapon possession outside the royal palace or not, while confirming he had seen information about someone being arrested.

There has not been any official statement from Prince Charles or Buckingham Palace on the incident.