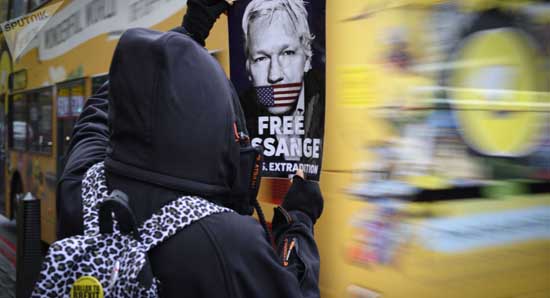 On Monday, hearings took place for the extradition of imprisoned co-founder of WikiLeaks, Julian Assange, facing charges of espionage and computer hacking following the 2010 leak of classified materials relating to military operations in Afghanistan and Iraq.

Lawyers for WikiLeaks founder Julian Assange are planning to introduce evidence in Assange’s extradition proceedings that suggest the involvement of Richard Grenell, the new intelligence chief in the US President Donald Trump administration, in an alleged plot to arrest Assange on the order of Trump, according to Politico.

Representatives for Assange’s defence team are intending to argue during the hearings this week in London that the extradition process of their client was abused at an early stage. They are reportedly expected to introduce recordings and screenshots of communications of Arthur Schwartz, a Grenell associate, in addition to a secondhand claim that the official was fulfilling Trump’s orders.

The team is also expected to claim that Grenell’s involvement was extensive and that it corrupted the extradition process early by agreeing to exclude a particular sentence before allowing a trial and sentencing to take place.

Arguments by Assange’s defence team reportedly cite an ABC News report from April 2019 which alleges that Grenell, then the US ambassador to Germany, asked the Ecuadorean embassy in the UK to hand over the Australian citizen, promising not to pursue the death penalty.

The attorneys are expected to provide evidence that will reveal how Trump politicized the extradition process.

Those materials were given to the defence team by Assange defender and former Sputnik employee Cassandra Fairbanks and will be introduced to the court as soon as Wednesday, according to Politico, citing a source.

Australian national Assange is currently sought by the US for extradition to face multiple charges of espionage, following the leak of classified materials relating to US military operations in Afghanistan and Iraq in 2010.

If brought to and convicted in the United States, Assange could face a prison term of up to 170 years. The ongoing initial court hearing in London will likely continue for the rest of this week, with a second hearing set for May.