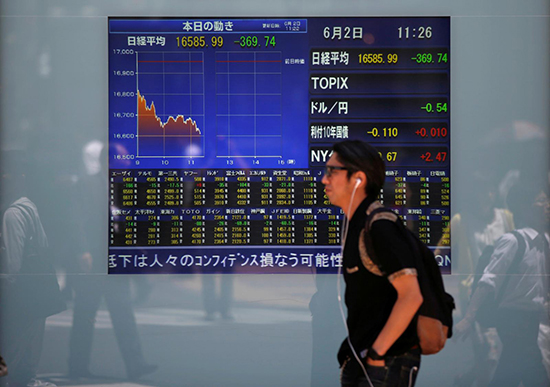 SINGAPORE (Reuters) – Stocks sunk deeper into the red on Thursday, oil prices fell and U.S. Treasuries rallied into record territory as more signs of the global spread of the coronavirus heightened fears of a pandemic.

Global markets have dropped for six straight days, wiping out more than $3.6 trillion in value. Much remains unknown about the virus that originated in China, but it is clear the ramifications of the world’s second biggest economy in lockdown for a month or more are vast.

Analysts have sharply downgraded their China and global growth forecasts, while policymakers from Asia, Europe and the United States have begun to prepare for a potentially steep economic downturn than initially anticipated.

Oil, sensitive to global growth given the vast energy consumption in a many countries, fell more than 1% to its cheapest in over a year. [O/R]

MSCI’s broadest index of Asia-Pacific shares outside Japan .MIAPJ0000PUS fell 0.5% and is down more than 4% for the week.

The yield on U.S. Treasuries, which falls when prices rise, dropped in to uncharted waters underneath 1.3% US10YT=RR. Bets on monetary easing in the United States have surged. [US/]

“I think the market is just pushing the Fed to cut rates,” said Stuart Oakley, Nomura’s global head of flow FX in Singapore.

“It’s a flight to quality as well,” he said.

“The news seems to be creating this mass hysteria everywhere, there’s panic that the world’s about to end, so people are getting out of risk and putting their money in safe havens and the biggest one of those are 10-year Treasury bond.”

China accounts for about 96% of cases but most new infections are now being reported elsewhere.

News on Thursday of a jump in cases in South Korea was accompanied by a warning that the virus may be spreading in California.

Taiwan raised its epidemic response level to the highest possible. Japan’s Nikkei dropped 2% to a four-month low amid more worries that the Tokyo Olympic Games could be cancelled or shifted. [.T]

And on top of that a tour-bus guide in Japan also tested positive to the virus for a second time, raising questions about how the pathogen spreads.

“This feels like a consolidation, potentially before another leg down,” said Jeffrey Halley, Senior Market Analyst at brokerage OANDA by phone from Jakarta.

The only bright spot, ironically, was China’s stock market, which climbed in relief that domestically, at least, the containment efforts are showing signs of working. [.SS]

At the same time as the breadth of the virus’ spread has knocked markets, analysts have been steadily revising their estimates of the economic damage higher.

“There is no equivalent exogenous shock the world has gone through in the post-Bretton Woods period,” said Deutsche Bank analyst Alan Ruskin in a note.

Only a dramatic ratcheting higher of bets on interest rate cuts in the United States has given pause to the huge flow of money from Asia into greenbacks in the currency markets.

From almost nothing a week ago, markets are pricing a roughly even chance of a Federal Reserve interest rate cut next month and have almost fully priced a cut by April. <0#FF:>

That was enough to help drag the China-sensitive Aussie dollar AUD=D3 from an 11-year low and lend support to the euro EUR=. [FRX/]

The safe-haven Japanese yen JPY= firmed to 110.02 per dollar.