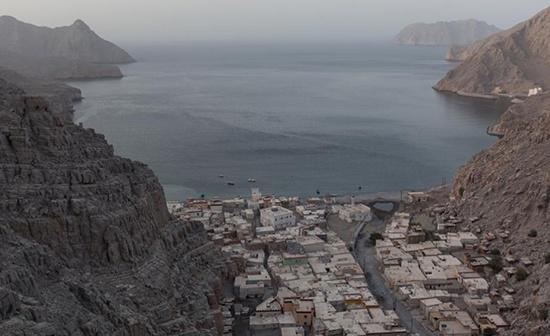 With a fiscal breakeven oil price of just over US$87 per barrel (pb) of Brent this year, around 85 per cent of its revenues still coming from the hydrocarbons sector, but only around five billion barrels of estimated proved oil reserves (barely the 22nd largest in the world), the sultanate of Oman has long been looking for some way to safeguard its financial future. Against the backdrop of an increasingly geopolitically polarised Middle East between pro-Saudi and pro-Iranian factions, Oman appears to be seeking to solidify its image as a relative regional safe-haven in order to achieve this financial goal. A slew of announcements in recent weeks support this re-positioning.

In basic terms, Oman has a huge natural advantage in pursuing this strategy, which is simply its geographical position. It has long coastlines along the Gulf of Oman and along the Arabian Sea, away from the extremely politically sensitive Strait of Hormuz. These offer largely unfettered access to the markets of South Asia, West Asia, and Africa, as well as to those of its neighbours in the Middle East. It has also been careful not to clearly align itself with either the pro-Saudi Arabian countries in the Middle East (or with the U.S.), including the UAE and Kuwait, or with the pro-Iranian countries in the region (or with Russia), including Iraq, Syria, Lebanon and the remainder of the Shia crescent of power. There has been talk – and some action – off and on over the years about an Iran-Oman gas pipeline finally going ahead but since the re-imposition of sanctions by the U.S. in 2018, Oman has let the matter slide.

Instead, the Sultanate has sought to develop three elements to financial stability. The first involves focussing on the development of value-added products in the petrochemicals sector rather than on unrefined crude oil flows or gas exports, with the focus being the multi-layered Duqm Refinery and future Duqm Petrochemicals projects (including the tangential Ras Markaz oil storage terminal project, and the Muscat-Sohar Product Pipeline project). The second is deepening its relationship with China, both in terms of hydrocarbons and petrochemicals exports and infrastructure projects relating to the ‘One Belt, One Road’ programme. In the hydrocarbons sector alone, as of the end of January, Oman’s daily production of crude oil and condensates stood at 958,270 barrels, with Chinese demand accounting for over 85 per cent of all this output. And the third is ensuring that none of the resultant revenues are frittered away on unexplained project expenses or vanity projects. Related: Major Bank Sees Abysmal Demand Growth For Oil

A perfect example of first two points is Oman’s focus on the US$3.6 billion Liwa Plastics Project industrial complex near the Oman Oil Refineries and Petroleum Industries Company’s Sohar refinery in the Special Economic Zone Authority at Duqm. This is specifically designed to enable Oman to capitalise on the synergies with the refinery and the market for plastics in China, the fastest-growing market for these products in the world. At the same time, Oman recently announced that it has increased the planned investment in the flagship Duqm Refinery and future Duqm Petrochemicals projects from the initial US$6 billion (for the Refinery element) to a combined US$18 billion. This will enable downstream production to increase from its current 15 million tonnes to 24 million tonnes by 2030, while the commodity sales volumes will nearly double from 21 million tonnes to 40 million tonnes by the same date.

To further tie China in to the future economic stability and well-being of the Sultanate, Oman has signed a land lease agreement to establish a huge industrial park in Duqm that will allow a number of Chinese companies to invest in the Sultanate to the tune of at least US$10 billion in the first instance. Although initially focussed on expanding the capacity and product capabilities of the Duqm Refinery and associated operations, the deal then pans out into a much broader range of projects in three areas – heavy industrial, light industrial, and mixed-use – all of which will be ready within the next five to 10 years. In the light industrial zone there will be 12 projects, according to Yahya bin Said al Jabri, chairman of the Special Economic Zone Authority of Duqm, including the production of 1 gigawatt (GW) of solar power units, and the production of oil and gas tools, pipelines and drilling equipment.

The mixed-use sector will focus on projects designed for the tourist trade, including the construction of a US$150 million hotel on a 10 hectare area, US$100 million to build a hospital, and US$15 million towards a school. The heavy industry sector will also see 12 projects, dealing with the production of commercial concrete, building materials and related industries, production of glazed glass, methanol and other chemicals. In addition, the site will cater for steel smelting, aluminium production, production of vehicle tires, building materials for protection against water and corrosion, extracting magnesium from seawater, and various chemical-aromatic projects.

At the same time, though, there will be none of the wasteful spending that is often seen surrounding such projects in other countries in the region. Some time ago, the Sultanate’s Financial Affairs and Energy Resources Council announced that it had formed a specialised working group to study public spending and the means to reduce it, and the Omani government announced that it would apply zero-based budgeting in the ninth five-year plan of approving allocations for development projects only after all feasibility studies and real cost analysis of each of them had been completed. The Council also underlined that it aimed to avoid having any additional requests for funding from developers after any project had been started. Related: Oil Price Forecasts Take A Turn For The Worst

Similarly forward-looking, though, Oman appears cognisant that although China will remain a key partner in its future in all economic spheres, other partner options also need to be developed in tandem. Specifically, the last few weeks have seen the development of Oman’s first-ever deepwater oil well, and by non-Chinese partner, Italy’s Eni. Earlier this month, a drillship chartered by Eni Oman began drilling activities in Block 52, a vast deepwater concession that extends off the Sultanate’s southern and south-eastern seaboard, according to the company’s managing director, Salvatore Giammetti. Also earlier this month, Oman’s Oil & Gas Ministry signed a new exploration and production sharing agreement (EPSA) with a joint-venture consortium comprising French super-major, Total, and Thai state-owned PTT Exploration and Production (PTTEP), for the rights to explore and develop the non-associated gas resources within Block 12.

With an eye to future such investments, Oman also announced a few days ago that Masirah Oil Limited (MOL) has successfully completed the drilling of an appraisal well in Block 50, with first oil already flowing. According to government statements, the Yumna-1 well, located 30 kilometres off the Sultanate’s east coast near Masirah Island, was spudded on 26 December, and has tested so far at a production rate of 11,843 stock tank barrels of oil per day through a one-inch choke, with a crude oil gravity of 42 degrees API.

In the meantime, a second exploration well drilled in the concession has successfully reached a well target depth of more than 3,000 metres into the Cambrian formation and a restricted flow rate of 3,500 barrels per day of light oil of high quality without associated water has begun. Currently, OilPrice.com understands from sources in Muscat, all of the oil now flowing is being stored temporarily on board Aframax tankers. In broader terms, a Muscat-based legal source familiar with the government’s plans told OilPrice.com last week, the spudding of the new appraisal well and the corollary success of the venture so far bodes well for a push in the coming weeks to entice further major foreign oil and gas industry players to sign EPSAs both in the Yumna oilfields and elsewhere in the country.