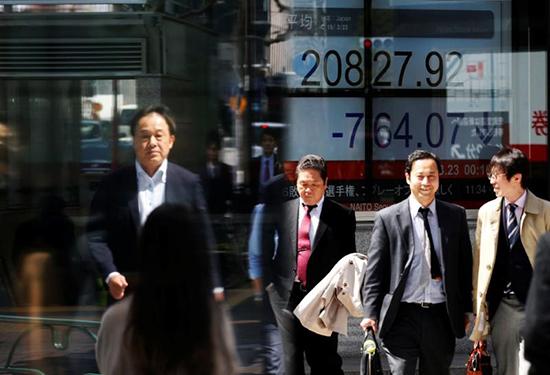 AFP -Stock markets tumbled Thursday after US President Donald Trump announced a 30-day ban on travel to the United States from Europe over the coronavirus.

Asian markets were already a sea of red at the open, with traders taking their lead from a global rout as the World Health Organization declared the spread of the new virus was officially a pandemic.

But Trump’s announcement of the 30-day ban, which excludes Britain, caused further selling, despite a series of measures intended to ease the financial pain of the outbreak, which has paralysed travel and hit businesses around the world.

Australia’s ASX was down 5.4 percent, while Hong Kong tumbled three percent at the open.

The news also sent the yen higher, with the safe haven currency gaining as uncertainty continues. The dollar fetched 103.63 yen by 0130 GMT, from 104.57 yen in early Asian trade.

“Travel restrictions equal slower global economic activity, so if you need any more coaxing to sell… after a massively negative signal from overnight trading in US markets, it just fell in your lap,” he added.

The losses followed another brutal session on the US markets, with wave after wave of bad news, including Hilton withdrawing its earnings forecast and Boeing saying it would suspend most hiring and overtime pay.

The coronavirus outbreak has left virtually no sector untouched, though travel and tourism have been particularly hard-hit as countries institute travel bans and quarantine requirements.

The Dow Jones Industrial Index plunged around 1,465 points, or 5.9 percent, to 23,553.22 on Wednesday, in a bruising session that left the index more than 20 percent below its peak, making it a bear market.

Leading stock markets in Europe also retreated, including the FTSE 100 which dropped 1.4 percent despite the Bank of England slashing its key interest rate to a record low and the government pledging $39 billion of fiscal stimulus.

Analysts said markets were struggling under the weight of twin crises: the burgeoning coronavirus outbreak and an oil price war.

The oil market was already under pressure after Saudi Arabia and Gulf partner UAE stepped up a price war with plans to flood the global markets.

The move is the latest escalation of a fight among oil producers after Russia balked at an OPEC-backed plan to cut production in response to lost demand from the coronavirus.

“The virus itself continues to spread in Europe and the US, meaning more extensive containment measures are likely, which will weigh further on global growth,” said Tapas Strickland, senior analyst at National Australia Bank.

“Markets are crying out for a co-ordinated response to COVID-19 headwinds and a lack of concrete US policy action is rattling markets,” he said.

But the measures did not appear to be enough to convince investors, though Innes said the stepped up US action could herald “an avalanche of global fiscal action across the board” that might cheer markets eventually.