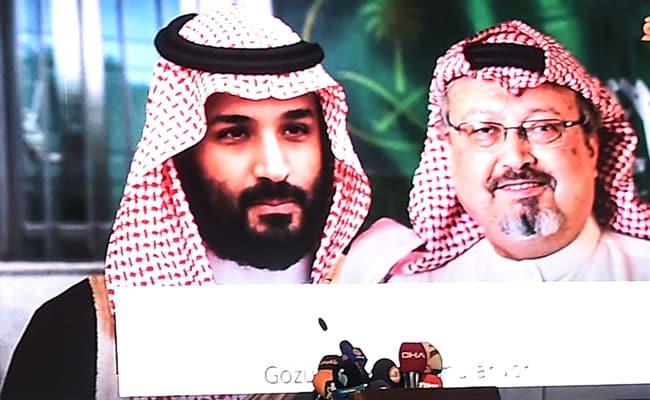 Khashoggi, who was a resident of the U.S., had walked into his country’s consulate on Oct. 2, 2018, for an appointment to pick up documents that would allow him to marry. He never walked out, and his body has not been found.

Turkish police officer walks past a picture of slain Saudi journalist Jamal Khashoggi prior to a ceremony. (AP Photo)

A statement from the Istanbul chief prosecutor’s office said it has completed its investigation into Khashoggi’s grisly killing at the Saudi Consulate in Istanbul and has indicted 20 Saudi nationals. The killing drew international condemnation and cast a cloud of suspicion over Prince Mohammed.

All suspects, however, have left Turkey and Saudi Arabia has rejected Turkish calls for their return to face trial in Turkey. Riyadh insisted the kingdom’s courts are the correct place for them to be tried and have put 11 people on trial over the killing.

The Turkish indictment charges the prince’s former advisers, Saud al-Qahtani and Ahmed al-Asiri, with “instigating a premeditated murder with the intent of (causing) torment through fiendish instinct,” according to a statement from Chief Prosecutor Irfan Fidan’s office.

The indictment also calls for life prison sentences for 18 other Saudi nationals charged with carrying out “premeditated murder with the intent of (causing) torment through fiendish instincts.”

Khashoggi, who was a resident of the U.S., had walked into his country’s consulate on Oct. 2, 2018, for an appointment to pick up documents that would allow him to marry. He never walked out, and his body has not been found.

A team of 15 Saudi agents had flown to Turkey to meet Khashoggi inside the consulate. They included a forensic doctor, intelligence and security officers, and individuals who worked for the crown prince’s office, according to a report last year by U.N. special rapporteur Agnes Callamard. Turkish officials allege Khashoggi was killed and then dismembered with a bone saw.

Fidan’s office said the 18 suspects are accused of “acting in consensus from the beginning in line with the decision of taking the victim back to Saudi Arabia and of killing him if he did not agree.”

The statement did not provide further details and it was not immediately clear if the suspects would be tried in absentia.

The trial in Saudi Arabia last year concluded that the killing was not premeditated, prompting widespread criticism of a “whitewash.”

Five people were sentenced to death while three other people were found guilty of covering up the crime and were sentenced to a combined 24 years in prison. Saudi authorities have said al-Qahtani was investigated and had no proven involvement in the killing, while al-Asiri was tried and released because of insufficient evidence.

Turkey, a rival of Saudi Arabia, has used the killing on its soil to pressure the kingdom. It apparently had the Saudi Consulate bugged and has shared audio of the killing with the C.I.A., among others.

Saudi Arabia initially offered shifting accounts of Khashoggi’s disappearance. As international pressure mounted because of the Turkish leaks, the kingdom eventually settled on the explanation that he was killed by rogue officials in a brawl.

US Tells Iraq That It May Pull Out Of Baghdad Embassy