An ambulance sits outside the US Capitol in Washington, DC, Monday. Photo: AFP

A recent survey by the Eurasia Group Foundation (EGF) shows that Chinese people have a more negative attitude toward the US political system and democracy. When asked to choose a rationale for why they dislike US democracy, most respondents chose “government is inefficient when too many different opinions and interests compete” and “the US idea of democracy is hypocritical – ordinary voters don’t actually have power.”

Twenty-eight percent of Chinese respondents reported an unfavorable view of the US, a year-on-year increase of 11 percentage points. Chinese people’s change in attitude is based on facts and evidence. The US’ response to COVID-19 has made Chinese people feel that the US’ social system is not what they had previously thought, especially when compared to China’s effective control of its domestic COVID-19 epidemic. This has indeed led to changes in Chinese people’s attitude toward the US.

The US’ response to the COVID-19 epidemic has been very ineffective. Federal and state governments have been shirking their responsibilities. Some American politicians did not make saving lives the top priority due to their personal interests, the upcoming 2020 presidential election and economic interests. This has led to serious consequences.

In the past, many Chinese people didn’t have a clear understanding of the US system. They simply believed that the great national power of the US was connected to its system. After seeing the US government’s handling of the epidemic, many Chinese have realized that this is not entirely the case. This will have a great impact on the image of the US in minds of Chinese people. The US system is clearly flawed when it comes to implementing control measures to contain the crisis.

According to the EGF’s survey, about half of Chinese respondents believe that in the past 20 years, the US has made the world worse off. Over the past decades, China’s peaceful development has provided the world with many opportunities. China has shared its dividends from development with the rest of the world. This is obvious to many countries.

But the US, as the only superpower since the end of the Cold War, has brought chaos to the world because of its military strength, the color revolutions it promoted and its propaganda promoting so-called democracy and freedom.

This has become increasingly obvious since the end of the Cold War. The US has provoked color revolutions in many countries and regions around the world. The latest example is Hong Kong Special Administrative Region of China that suffered from serious social chaos due to the US’ strong political interference. All these facts have made Chinese people see US hegemony more clearly. The country has become a troublemaker in the international community.

China respects political systems that embody real democracy and freedom. However, the US’ so-called democracy and freedom is not a benign political aspiration, but designed to promote its own hegemony. The US has not considered other countries’ development. It purposefully attempts to control these countries and manipulate the international situation. People have more clearly realized this over the past two decades.

There have been profound changes in China-US relations since US President Donald Trump came into power. US moves that are aimed at confronting China, especially the US-launched trade war against China, are obviously irrational. These have made the Chinese people understand US hegemony and the harm it has caused them. The US promotes itself as a beacon of democratic and free country, but now, in the minds of many Chinese people, it has exposed its darker side.

The article was compiled by Global Times reporter Li Qingqing based on an interview with Su Hao, founding director of the Center for Strategic and Peace Studies at the China Foreign Affairs University. [email protected] 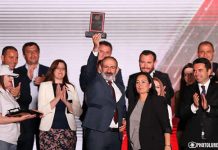 “Dictatorship of law” will be established in Armenia – Nikol Pashinyan