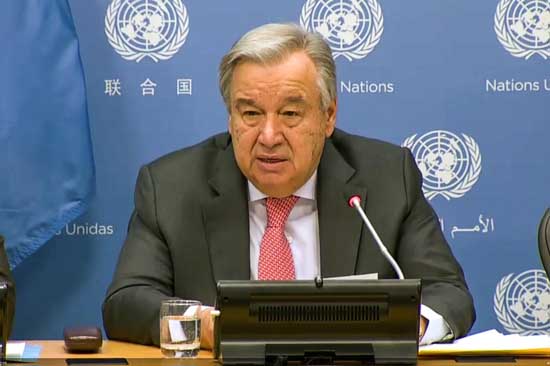 Antonio Guterres warned against poisonous misinformation on social media that is putting more lives at risk.

UN Secretary General Antonio Guterres on Tuesday blasted a “dangerous epidemic of misinformation” about the Coronavirus and urged people around the world to “trust in science” against a “poison that is putting even more lives at risk.”

Social media has been inundated by opposition to vaccines, promotion of the idea that Covid-19 is just like a normal flu, that hospitals are empty and that enforced self-isolation based on medical advice is only an excuse to impose a permanent police state.

“Harmful health advice and snake-oil solutions are proliferating,” Guterres said in a video message. “Falsehoods are filling the airwaves. Wild conspiracy theories are infecting the Internet. Hatred is going viral, stigmatizing and vilifying people and groups.”

The secretary-general called for trust in institutions and leadership based on evidence and for social media companies to root out the misinformation that threatens the effort to combat the pandemic.

Guterres unveiled the establishment of a new UN Communications Response initiative “to flood the Internet with facts and science.”

Guterres said: “Together, let’s reject the lies and nonsense out there.”

Over these two, three-month periods, the rate of death is dramatically higher for Covid-19 (4.24 percent) than the flu (0.045 percent), and this comes with the mitigating effects of lock-downs and social isolation, not practiced for common influenza.  There is no vaccine for Covid-19 as there is for influenza, making it that more dangerous.

Defends WHO Against Trump

Guterres on Tuesday also blasted the decision by Donald Trump on the same day to cut U.S. funding for the UN-affiliated World Health Organization (WHO). Seeking to deflect blame from himself for his poor handling of the crisis, Trump cut $ 400 million (about 15 percent of the agency’s funding), saying WHO had “failed in its basic duty” to combat the pandemic.

“I am directing my administration to halt funding while a review is conducted to assess the World Health Organization’s role in severely mismanaging and covering up the spread of the coronavirus,” Trump told his daily Covid-19 White House briefing.

“This virus is unprecedented in our lifetime and requires an unprecedented response. Obviously, in such conditions, it is possible that the same facts have had different readings by different entities. Once we have finally turned the page on this epidemic, there must be a time to look back fully to understand how such a disease emerged and spread its devastation so quickly across the globe, and how all those involved reacted to the crisis. The lessons learned will be essential to effectively address similar challenges, as they may arise in the future.

But now is not that time.

As it is not that time, it is also not the time to reduce the resources for the operations of the World Health Organization or any other humanitarian organization in the fight against the virus.”