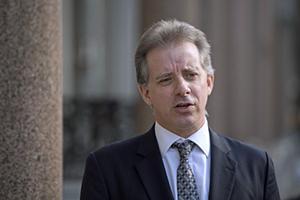 The Justice Department inspector general’s report, issued December 2019, exposed a series of “significant”errors and omissions the FBI made in its applications to spy on Carter Page, many of which involved failures to disclose evidence undermining Steele’s allegations of a “conspiracy of cooperation” between the Trump campaign and the Kremlin.

The bombshell information was contained in freshly redacted footnotes from the Justice Department Inspector General’s report on the Federal Bureau of Investigation’s surveillance of the Trump campaign, and the organisation’s controversial ‘Crossfire Hurricane’ investigation. Released by Senators Chuck Grassley and Ron Johnson 15th April, it’s just the latest indication Steele was hoodwinked by Russian intelligence, and fed disinformation which ended up in his infamous and utterly discredited ‘Trump-Russia’ dossier.

​The footnotes state in late January 2017 an investigator on the Crossfire Hurricane team received information Russian intelligence “may have targeted Orbis” and researched the company and moreover knew about the probe almost as soon as it started. Nonetheless, despite significant cause for misgivings about the dossier’s probity – and Steele himself – the Bureau relied on the salacious ‘Trump-Russia’ document to obtain authorisation to wiretap Carter Page, a former Trump campaign aide.

Steele, a former MI6 officer, began investigating the Trump campaign on behalf of the DNC and Clinton campaign June 2016 at the behest of opposition research firm Fusion GPS – he relied on a lone source for the dossier’s information, who in turn allegedly collected information from a network of sub-sources. However, the inspector general report revealed Steele’s as-yet unidentified primary source disputed how information in the dossier was characterized, and said Steele misrepresented and embellished allegations therein.

​The FBI obtained information 12th January 2017, two days after BuzzFeed published the dossier in full, that Steele’s allegation former Trump lawyer Michael Cohen visited Prague August 2016 was the product of Russian disinformation. On 27th February, the FBI came to understand Russian intelligence had fed the farcical claim Trump used prostitutes during a 2013 trip to Moscow, and been secretly filmed by Russian intelligence, to Steele.

Strikingly, the newly-declassified footnotes also indicate the FBI’s Transnational Organized Crime Intelligence Unit launched a validation review of Steele as an agency source in 2015 because of his links to five wealthy Russian businessmen, and his contact with them “in a short period of time was unusual”.

Another footnote said the Bureau received information early June 2017 about “personal and business ties between” Steele’s primary source of information for the dossier and sub-source – the latter, is said to have had contacts with an individual in the Russian Presidential Administration in June and/or July 2016, and voiced “strong support” for Hillary Clinton during the 2016 election campaign, one footnote says.

Countries supporting Libya’s Haftar are on ‘wrong side of history’: Erdoğan aide