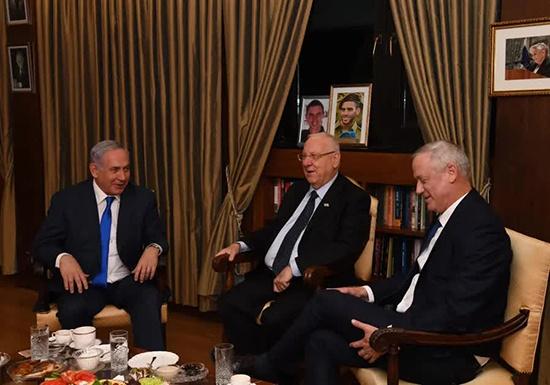 President Reuven Rivlin has set August 4 as the date for an unthinkable round of fourth elections should the Likud and Blue and White fail to form a unity government, as negotiations between the two sides was deadlocked Thursday night.

Negotiations between the two parties have been stuck over the Likud’s demands to pass legislation to protect Netanyahu from possible rulings by the High Court of Justice which might invalidate him either as prime minister or later as deputy prime minister due to his criminal indictments.

Rivlin’s office released a political timetable earlier on Thursday, laying out May 7 as the date by which an MK must be tasked by the Knesset, with forming a government, May 8 as the date for informing the Knesset speaker as such, and August 4 as the date for the next election, allowing for a three month campaign.

Despite the rapidly dwindling time for forming a government, Likud and Blue and White seemed now closer to a deal Thursday evening.

In light of the impasse, Blue and White indicated that if no agreement is reached by Monday, the party will advance legislation to prevent Prime Minister Benjamin Netanyahu from serving as prime minister.

Negotiations between the Likud and Blue and White have been stuck over the former’s legislative demands to protect Netanyahu from being toppled by the High Court of Justice, and the message emanating from Blue and White on Thursday afternoon was that the party was losing patience.

“Knesset Speaker and Blue and White Chairman Benny Gantz informed party MKs at a faction meeting on Thursday that he intends to fully activate the Knesset next week as is necessary and as he pledged at his election as speaker,” a party spokesman stated on Thursday afternoon.

Blue and White sources indicated to The Jerusalem Post that the party would advance the legislation submitted to the Knesset in March which would prohibit an MK under indictment from serving as prime minister, and prevent anyone serving more than two terms as prime minister.

The threats could be a tactic to pressure Netanyahu into backing away from the multiple legislative demands the Likud has made to circumvent any decisions by the High Court in response to petitions it has received which might rule that it is legally prohibited for an MK under indictment to form a government.

Blue and White itself is under pressure from anti-Netanyahu activists who staged a demonstration at the Habima Square in Tel Aviv Thursday evening calling on Gantz not to join a Netanyahu led government.

The police allowed the so-called Black Flag protest to be staged in condition that protestors observed the two meters distance rule, which they complied with for the most part, while denouncing Netanyahu for “corruption” and “dictatorship.”

Earlier on Thursday, President Reuven Rivlin called time on Blue and White leader Benny Gantz’s efforts to form a government, bypassed Prime Minister Benjamin Netanyahu, and gave the mandate to form a coalition to the Knesset, on Thursday morning.

The president decided that Gantz and Netanyahu were not sufficiently close to forming the long-discussed national-unity government, and ostensibly reasoned that shortening the timeline for a coalition agreement would increase the pressure on both sides to compromise.

Rivlin’s decision means that there is now 21 days for a majority of Knesset members to request, in writing, that the president assign the task of forming a government to a specific MK.

Should an MK, most likely Gantz or Netanyahu, get a majority of MKs, they will have 14 days to form a government.

If there is no such majority for any candidate, or a selected candidate fails to form a government in 14 days, then the unthinkable happens and the Knesset would automatically dissolved and fourth elections called.

The negotiations between Blue and White and Likud have continued regardless, since were they to arrive at an agreement Gantz would likely be given a majority by the Likud, the ultra-Orthodox parties, and his own party to regain the mandate, and then establish a government according to the deal reached between the sides.

Rivlin explained his decision in the letter he wrote to Knesset Speaker Gantz, the president said that he did “not see the possibility of forming a government and I entrust the formation of a government to the Knesset.”

Continued the president “I hope that the Knesset Members will be able to form a majority in such a way that a government can be formed as soon as possible, and to prevent a fourth round of elections.”

Although progress was made between Likud and Blue and White towards the formation of a government on Monday and Tuesday, by Wednesday night the latter was protesting that the Likud was seeking legislation that would amount to immunity from prosecution for Netanyahu.

The Likud concerns relate to what may happen when Netanyahu’s rotation period as prime minister ends after a year and a half, and Gantz’s begins, with the former becoming deputy prime minister.

The position of deputy prime minister is akin to that of any other minister, and regular government ministers are required to resign if under indictment, as Netanyahu currently is.

The Likud is therefore demanding legislation to amend the Basic Law: Government that would prevent such an eventuality, something which Blue and White sees as efforts to circumvent the High Court which it is reticent to do.

Kan News reported Wednesday night that Blue and White sources were insisting that “we will not let Netanyahu turn the coalition agreement into an immunity [from prosecution] agreement.”

Another problematic aspect of the agreement is a legislative mechanism which would guarantee that Gantz would serve as prime minister once Netanyahu’s period ends after 18 months.

The Likud is now worried about this legislation however and is disputing how they should be implemented.