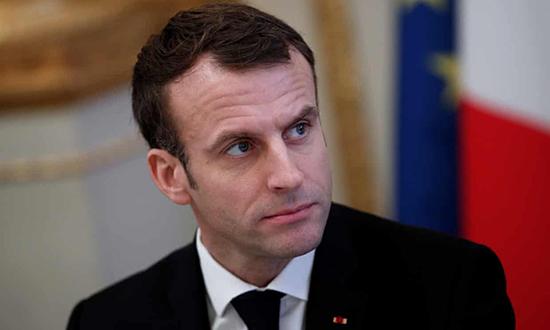 For the first three years of his presidency, Emmanuel Macron of France has been the very symbol of austerity and neoliberalism: in every way the bankers’ president.

Coming from an investment bankers’ background at Rothschild & Co., and fully backed by the money-men, Macron captured the presidency in May 2017. He set out to complete the move towards the Anglo-Saxon model that French leaders had tried to hinder until Nicolas Sarkozy took the reins in May 2007.

Sarkozy commenced with undoing the French social contract, partially revoking the inheritance tax, reducing taxes on the rich, deregulating business and beginning the attack on the 35-hour work week.

Macron was supposed to finish the job. Until he suspended his free-market “reforms” last month in the midst of the Coronavirus crisis, he was ruthlessly taking on labor unions and pensioners in a relentless drive to further “modernize” France in favor of bankers and corporate boardrooms, sparking massive street protests.

But something strange has happened since the Coronavirus hit France. An apparent humanity buried deep inside the French president has suddenly emerged—and let the bankers be damned.

In an interview on Thursday with the Financial Times, Macron talked about economics as a “moral science” and said European debt should be mutualized, meaning northern Europeans should be on the hook for southern debt—or face the wrath of right-wing populists.

He said the European Union was not just a market but was really about human beings. In other words, he was calling for state intervention in the economy, going against everything he has heretofore believed. “We are all embarking on the unthinkable,” he said.

The French president said he sees the crisis as “an existential event for humanity that will change the nature of globalization and the structure of international capitalism,” the newspaper reported. “In recent years [globalization] increased inequalities in developed countries,” he admitted. “And it was clear that this kind of globalisation was reaching the end of its cycle, it was undermining democracy.”

“We are going to nationalise the wages and the P&L [the financial accounts] of almost all our businesses. That’s what we’re doing. All our economies, including the most [economically] liberal are doing that. It’s against all the dogmas, but that’s the way it is.

“I believe [the EU] is a political project. If it’s a political project, the human factor is the priority and there are notions of solidarity that come into play . . . the economy follows on from that, and let’s not forget that economics is a moral science.”

When ruling circles are in crisis as they are now, state intervention, even socialism becomes acceptable to them. In the face of this crisis, governments around the world are nationalizing industries and paying the wages of laid-off workers. But when the rulers’ crises are over they tend to return to repressive measures against the working classes who are always in crisis.

Like Macron, Sarkozy also underwent a transformation of sorts during the 2008 financial crisis, declaring that “laissez-faire capitalism is over” and condemning the “dictatorship of the market.” Asked if he had suddenly become a socialist, Sarkozy said, “Have I become socialist? Perhaps.” After the collapse was over, Sarkozy returned to the politics of austerity.

The question remains: is Macron’s transformation genuine? The answer will come when France emerges from this crisis.

Joe Lauria is editor-in-chief of Consortium News and a former correspondent for The Wall Street Journal, Boston Globe, Sunday Times of London and numerous other newspapers.  He can be reached at [email protected] and followed on Twitter @unjoe .