LONDON (Reuters) – Caution gripped markets on Thursday, with stocks falling before a key Eurogroup meeting to discuss joint stimulus measures, offsetting optimism from a fresh round of U.S. coronavirus aid and a recovery in oil prices.

The U.S. Congress looked on course to approve nearly $500 billion more in aid to help small businesses, while European Union leaders make another attempt at agreeing on a joint recovery fund.

European stocks slipped 0.4% and U.S. stock futures were down 0.3% after a strong showing on Wednesday.

“EU Council meeting will be closely watched to see how quickly EU policy makers will move towards area-wide fiscal risk-sharing,” said George Cole, an economist at Goldman Sachs. “We expect the discussions to fall short of a full commitment to mutualise risks from the COVID-19 shock.”

Adding further pressure were business activity surveys in the euro zone that showed economies suffered massive blows from the coronavirus outbreak and measures to contain it.

IHS Markit’s Flash Composite Purchasing Managers’ Index (PMI) for the bloc, seen as a good gauge of economic health, sank to 13.5, by far its lowest reading since the survey began in mid-1998.

Stocks and other risky assets barely acknowledged those numbers, though, since they were mostly backward-looking data. It was the EU meeting and the outcome that weighed on markets.

“Frankly, if we saw a full agreement today that would be a surprise, but progress and something that Italy can sign up to will be the key,” Jim Reid, a strategist with Deutsche Bank, said.

Italian two-year government bond yields fell 5.5 basis points to 1%, after earlier slipping as much as 12 bps to 0.94%. Ten-year yields were down by the same amount at 2.05%.

The silver lining in macroeconomic news overnight was the European Central Bank’s decision to let banks post collateral that was downgraded to junk during the coronavirus outbreak to prevent a credit squeeze in the euro zone. That pushed down the cost of insuring exposure to a basket of sub-investment grade European companies.

Asia was still riding the recovery in crude oil prices. MSCI’s broadest index of Asia Pacific shares outside of Japan rebounded from two-week lows to be up 0.4% following an overnight lead from Wall Street.

Brent oil extended gains on Thursday to rise 5% to $21.46 a barrel on the prospects for further production cuts to reduce the glut in the oil market. U.S. crude gained 6% to $14.61.

In currencies, the dollar slipped against the currencies of oil-producing states, giving up earlier gains as the recovery in crude prices helped to soothe markets.

The dollar fell 1% against the Russian rouble and 0.6% against the Mexican peso, retreating from a two-week high earlier in the session.

Reporting by Thyagaraju Adinarayan in London and Swati Pandey in Sydney, editing by Larry King 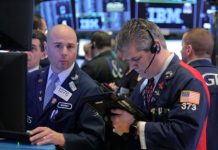