While one part of northern Italy teaches a cautionary lesson, a small town in neighboring Veneto offers a case study in good practices, Andrew Spannaus reports.

Two months after the start of the coronavirus epidemic in Italy, some important lessons can be learned from the response to the crisis in the northern regions of the country.

In Lombardy, one of the hardest-hit areas in the entire world, public officials insist they did everything possible to contain the outbreak from the start, but a comparison with the more effective methods followed elsewhere, starting with the neighboring Veneto region, shows how serious mistakes were made, and how they can be avoided.

These include a rapid response to identify and isolate cases, and the importance of telling citizens the truth, even when not politically expedient.

The family of one 84-year woman, who asked that her name not be used, told Consortium News the story of what happened to them in a town close to Vimercate, a small city just north of Milan.

A large, new hospital serves this high-income area, which has been strained to the limit by the Covid-19 outbreak. The woman was hospitalized due to an operation for a broken femur in early March. But just before her transfer to a rehabilitation facility, her family got the news that she had a fever and cough. She was found positive for the new coronavirus and kept in the hospital for another two weeks.

For the first few days though, her family had a difficult time getting information on her condition, and saw first-hand the inefficiencies of the local health system in dealing with the epidemic.

The patient’s daughter’s family of four responsibly assumed they should be quarantined, but the onus was on them to act. Hospital staff instructed them to call the local health authority (ASL), which her granddaughter immediately tried to do. Yet before she reached anyone, she had to call back repeatedly and wait on hold for hours.

Eventually the family was put under mandatory quarantine for two weeks, but it’s safe to assume that many people in such a situation would not have gone to all that trouble to get the authorities to do what should have happened automatically.

The woman ultimately recovered without any serious effects, and was sent home, but without another test. Shortly afterwards, three of the four members of her son’s family, who live downstairs from her, developed symptoms of the virus. None of them were tested either, but just told to remain isolated and call the doctor if things got worse.

This family’s experience demonstrates at least two of the deficiencies of the response to the crisis in Lombardy: first of all, that hospitals rapidly became breeding grounds for the virus; and secondly, the glaring lack of testing and tracing.

Soon after the initial creation of a “red zone” in the province of Cremona on Feb. 22, it became clear that another hot spot was present in the town of Alzano Lombardo, in the province of Bergamo. Several patients with interstitial pneumonia at the “Pesenti Fenaroli” Hospital had not been properly diagnosed as having Covid-19, causing the infection of both other patients and healthcare workers.

The emergency room was shut down and sanitized for just two hours on Feb. 23, but then reopened on orders from regional authorities. Soon it became clear that the infection was spreading in the community. On March 3, the Lombardy regional government suggested creating a red zone around Alzano, but didn’t insist when the national government resisted, apparently fearful of giving the impression that the situation wasn’t under control.

Within weeks, the virus exploded in the town of Alzano and the entire province of Bergamo, leading to hundreds of deaths. Caskets piled up, crematoriums began working overtime but still couldn’t handle the volume, and military transport vehicles were called in to transfer caskets to morgues and crematoriums in other areas.

The outbreak was so rapid that the authorities weren’t able to keep up. People were told to call their family doctor if they suspected they had the virus, but the instructions they received were often simply to stay at home, so as to avoid overwhelming the health system.  The result is that many who are positive for Covid-19 were never registered, and the real numbers are still not clear.

On March 24, about a month after the crisis exploded, the mayor of Bergamo, Giorgio Gori, told Consortium News that the real death count is probably around “four times as high” as the official figures. Many people have died at home, and an even higher number in nursing homes, which account for at least 40 percent of deaths; these are often discovered only weeks later, as we have seen in the United States as well.

A contributing factor was the region’s decision to allow recovering Covid-19 patients to be transferred from hospitals to nursing homes. The government insists that instructions were given to keep the patients separate from other residents, yet there is no question but that the homes rapidly became a deadly breeding ground for the virus.

There are different ways of counting deaths, which leads to various theories about whether Covid-19 is really the cause of the deaths announced, or just present when people die due to other conditions. That debate has been settled in part for Lombardy by the official population figures published by the national statistics institute ISTAT: for the city of Bergamo, there were four times as many deaths in the month of March 2020 as in the same month last year. The numbers show large percentage jumps in deaths for at least 100 Italian municipalities, the majority in Lombardy.

As the weeks go by, criticism of the regional government in Lombardy is rising. There were certainly factors beyond the control of the political institutions, and many decisions were made from the prime minister’s Office in Rome, not Milan. Yet while some politicians openly admit that they underestimated the situation at the beginning – such as Gori, the mayor of Bergamo – others in the regional government push back on suggestions they were too slow.

The vice president of Lombardy, Fabrizio Sala, got visibly upset and defensive when on April 7 Consortium News asked him what lessons could be learned from different responses to the crisis in different regions. “We were hit with a tsunami,” Sala retorted. “We were the only ones in the world hit so aggressively. Nobody else had what we had.”

Yet comparisons are certainly in order, if the aim is to learn how to do better in the future. The most obvious is with Veneto, the region next door to Lombardy in Northern Italy.

What happened in Vo’, a small town in Veneto that was included in the first set of lockdowns from Feb. 22, provides a textbook case of how to stop the spread of the virus. The town was shut down completely, and all access in and out was blocked. The entire population of 3,300 was then tested, finding that 3.1 percent were infected, almost half without any symptoms. Those positive were isolated, and their contacts tracked. The contagion was stopped cold, helping keep the spread of Covid-19 lower in the Veneto region.

On April 17, Consortium News asked the architect of this policy, the microbiologist Andrea Crisanti, who worked for years at Imperial College in London and now directs the microbiology laboratory at the University of Padua, why the same model wasn’t followed on a larger scale in Italy. Crisanti said that apart from certain structural advantages provided by a small town without a particularly dense population, he suspected a mix of factors such as confusion, budget constraints, incompetence, and political considerations.  He said:

“In Vo’ we had reached 3 percent [of the population infected] on Feb. 25. If we had not acted, it would have led exactly to what happened in Lombardy… We tested everyone: relatives, contacts. We denied tests to nobody, and we identified many people who were positive at the beginning. So the lockdown worked, and Veneto took a completely different track than other regions.”

Crisanti also pointed to Veneto’s greater preparation. This in part comes from having various laboratories that deal with problems such as West Nile Virus, as some areas of the region are subject to recurring mosquito-borne diseases.

At the same time, Crisanti ensured that the health authorities ordered the materials necessary for widespread testing before the virus even reached Italy. In January, they ordered sufficient “reagents” — a chemical solution for processing tests – to conduct approximately 500,000 coronavirus tests, and Crisanti’s laboratory even started producing reagents on its own.

Despite still encountering some supply issues, Veneto has currently performed almost the same amount of tests as Lombardy, despite having less than half the population.

It is notable that this strategy was not supported by national and international health authorities. Walter Ricciardi is the main scientific consultant to the Italian government, and the Italian representative on the Executive Board of the World Health Organization. On Feb. 27, Ricciardi told Italy’s largest daily, Corriere della Sera, that whoever decided to test people without symptoms was wrong: “Veneto’s strategy was not correct, because it deviated from the scientific evidence. […] The guidelines of the World Health Organization… were not followed” creating “confusion and social alarm.”

Ricciardi’s egregious comments, proven so wrong by the better outcomes not only in Veneto, but also in countries such as Germany and South Korea, exemplify a tendency seen since the beginning in Italy, that of failing to tell the population the truth. In fact, the real reason the Italian institutions were against widespread testing was because they didn’t have the resources; yet politicians and experts would only admit this under duress.

Something similar happened with masks: at the beginning they weren’t needed, then it was suggested only some people should use them, and then a classification was drawn up of different types of masks for different people; all while stressing the need to avoid “unnecessary waste of precious resources.”

Again, the underlying issue was that there simply weren’t enough masks to go around. Once they started arriving, regions made it mandatory for people to wear them outside.

It’s hard to think that deceiving the population to cover up a lack of resources is the best route to follow. If anything, telling people the truth about tests and masks can help reinforce the message to stay home when such precautions aren’t available.

The worst example of bending reality came in late March, when the Civil Protection Agency, which publishes daily statistics on the epidemic, began to change the way it reports Covid-19 cases. Rather than state the total number of new cases, they decided to subtract from that number those who got better (leaving the hospital), and the number of deaths. So now the more people die, the better the numbers are!

The situation is finally improving in Italy, gradually; but if the authorities continue to manipulate information regarding the extent of the crisis and how to effectively defeat the virus in order to deflect attention from errors in judgment and a lack of preparedness, they’re not doing anyone a favor. Better to tell people the truth, and point the way out of the crisis.

Andrew Spannaus is a journalist and political analyst based in Milan. He is the founder of Transatlantico.info, which provides news and analysis to Italian institutions and businesses. His latest book is “Original Sins. Globalization, Populism, and the Six Contradictions Facing the European Union,” published in May 2019.

How do experts view financial conflict of top two economies? 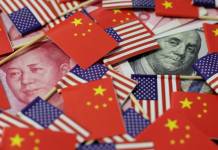 World needs to recognize gravity of a US-China ‘financial war’