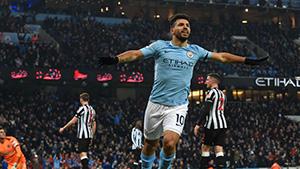 While the league’s clubs will talk over the logistics of ‘Project Restart’ on Friday, perhaps the forgotten factor during all these conversations are actually the feelings of the players.

With a lockdown still in place in the UK, and social distancing guidelines likely to be around for some time yet, Manchester City striker Aguero spoke for the “majority of players” who he says are worried about putting themselves in danger by returning to the football pitch.

The Premier League hopes to resume on June 8 with matches behind closed doors but televised live, with even thought about putting some on free to air.

It is the players, though, who will be the ones in most danger and Aguero says thet he and his team-mates will be nervous about returning to training and games when the virus is still around.

“The majority of players are scared because they have children and families,” Aguero told Argentinian TV station El Chiringuito.

“I’m scared but I’m with my girlfriend here and I’m not going to be in contact with other people. I’m locked in my house and the only person I could infect is my girlfriend.

“They’re saying that there are people that have it and don’t have any symptoms but still infect you. That’s why I am here at home. Maybe I have the illness and I don’t even know.”

“When one person is ill we will think ‘oh what’s happening here?’ I hope a vaccine will be found soon so that this all ends.”

Other discussion points for Project Restart include the possibility of playing games at neutral venues to cut down on the amount of people needed and travel for players and staff.

Players may also be required to wear masks when training and are set to be tested twice a week for Covid-19 symptoms.

The face masks part of the plan has already been rubbished by Brighton striker Glenn Murray, who called them farcical.

“Face masks is going to be off-putting; it is not going to be natural. People will be ripping them off in games,” said Murray. “It is quite farcical.

“I understand why people are desperate to get football on. It has to be done in a sensible way and in the right time and in a way that is going to keep everyone safe.

“There will be ambulances at training and games. Is it fair to take those from the NHS? I don’t know.

“It is not just two squads, there is a lot more involved and it puts more people at risk.”

Arsenal, Brighton and West Ham have opened their training grounds to players for individual work.

“I understand the public is desperate to get football back,” said Murray. “But it is us that are going to be going out there and competing against other teams.

“Everyone is in different situations. I have children at home. I wouldn’t want to jeopardise them. Some footballers have newly born children who might be more susceptible to getting the disease.

“Some are living with elderly parents. It is a really difficult situation to agree on.”