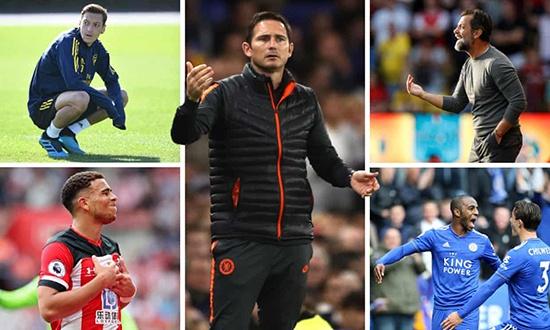 The Premier League has been told by the government it must show some matches on free-to-air TV and put more money into the Football League and grassroots game as a condition for restarting this season.

The demands were made by the culture secretary, Oliver Dowden, at a meeting on Thursday at which he gave the go-ahead for matches to resume provided it is safe to do so.

“The government is opening the door for competitive football to return safely in June,” Dowden said. “This should include widening access for fans to view live coverage and ensure finances from the game’s resumption supports the wider football family.”

“It is now up to the football authorities to agree and finalise the detail of their plans, and there is combined goodwill to achieve this for their fans, the football community and the nation as a whole. The government and our medical experts will continue to offer guidance and support to the game ahead of any final decision which would put these plans into action.”

The Premier League is in negotiations with its broadcast partners Sky and BT over finding a way of showing some matches free-to-air if and when the season resumes. The government’s preferred solution is that the remaining 45 matches not already covered under the terms of existing TV deals are shown either on freely accessible TV channels or via a streaming platform such as YouTube.

The government has also instructed the league to factor “solidarity payments” into any final reckoning should the season be completed. Broadcasters have demanded a rebate from the Premier League even if they are able to screen their full complement of matches, because of subscribers lost owing to the current postponement of the season and because the league has not been able to deliver the product as promised. The DCMS has asked, however, that a tranche of any remaining TV money received should in part be shared with the rest of the football pyramid.

The precise amount of any sum is yet to be determined and although the government has asked football to find a solution, this may not prove straightforward. The EFL is understood to expect an extra one-off payment, a contribution towards filling the potential £200m black hole in club finances it faces by September. Sources at the Premier League, meanwhile, suggest they see the government’s request as being about ensuring that funds owed under current solidarity arrangements are made available.

Rows over broadcast revenue are hardly new and other concerns are taking precedence. The immediate hurdle, well before any matches can be played, is enabling players to return to training after two months away from the field. The EFL and Premier League have devised medical protocols that conform with new government advice on training for elite athletes. The Premier League hopes to convince its 20 shareholder clubs to give their assent in a vote on Monday.

The outcome of the vote is not guaranteed, following a series of meetings on Wednesday between players, club managers and officials. Some of the players – the influential Watford captain, Troy Deeney, among them – are understood to have left the meeting feeling concerns over safety had not been resolved, and managers are believed to have asked for any pre-resumption training period to be longer than the three weeks budgeted for in the Premier League’s Project Restart plans. Managers and players will this week feed their thoughts back to clubs before the vote.

If the protocols are passed, players would be allowed to train in groups while observing physical distancing. Any contact training, a vital component in preparing for matches, would be allowed only following new protocols and further government advice.

Tottenham’s manager, José Mourinho, said: “I want to train and I am desperate for the Premier League to return as soon as it’s safe to do so, particularly now as we are seeing other leagues preparing to return to action.”

Speaking at the daily coronavirus briefing the government’s deputy chief medical officer, Jonathan van Tam, who was directly involved in drawing up government sporting guidance and spoke with top-flight players via video link on Wednesday, suggested that any further steps would not be immediate.

“The overall approach with easing social distancing has been one that has been tentative, measured, slow and step-wise,” he said. ‘That is exactly the plan that is under way for all of elite sport, not just football. The first of those is really to return to safe training still observing social distancing, and plans are taking place at quite some depth to be ready to do that.

“We will have to see how that goes before it is time to move on, or even think about moving on, to the return of competitive football matches. I think we have to be slow, we have to be measured.”