The US Attorney’s office for the District of Columbia on Thursday unsealed indictments against 28 North Korean and five Chinese representatives of North Korea’s Foreign Trade Bank (FTB) who are or were posted in China, Russia, Libya, Thailand, Kuwait, and Austria.

The specific charges in the new indictments include:

– Conspiracy. When a defendant forms an agreement with another person to commit an offense and performs an overt act toward completion of the offense, he can be convicted of conspiracy even if the didn’t complete the offense. In fact, one rarely sees an indictment without a conspiracy count.

The feds have charged the 33 defendants with conspiring to violate sanctions regulations, commit money laundering, and obtain financial services through the US financial system by evading Treasury and Federal Reserve regulations.

– Bank fraud. Because North Korea is barred from the financial system under the Patriot Act, FTB representatives defrauded banks by cooking up lies to conceal their affiliations with the FTB to obtain financial services.

Lying to bankers about due diligence queries and know-your-customer rules to sneak money through the US financial system is classic money laundering. The New York Times adds up the laundered transactions and reaches a grand total of $2.5 billion.

– Criminal and civil forfeiture counts. Because criminal forfeiture is only a possibility after the federal government arrests, tries and convicts a person, the feds typically will charge 18 USC 982, the criminal forfeiture statute, only if think they might be able to extradite someone. They made that charge here.

By comparison, most of these other cases were strictly civil forfeiture, under 18 USC 981. If there were arrests or extraditions in the making, the FBI would announce that, and I haven’t see a press release from them. If the defendants are beyond the reach of extradition and jurisdiction, civil forfeiture is the only real consequence the feds can apply to the FTB and its agents.

That’s probably sufficient to serve the purpose assuming the feds were able to seize a significant amount of money. And it turns out they were: $63,511,387.85.

Is it finally maximum pressure? No. As I’ve said all along, it will be maximum pressure when a Chinese bank gets hit with a nine-digit civil penalty or a serious indictment for violating North Korea sanctions.

That remains a distinct possibility for at least three major Chinese banks, but the records in those cases are still sealed and all we know is that they were held in contempt, appealed and lost, and that the banks’ appellate lawyers withdrew from representing them late last year.

OFAC’s penalty history tells us that both the Obama and Trump administrations applied maximum pressure to Iran because both administration were, at different points, serious about raising very high legal risks against Iran’s enablers.

The penalty history against North Korea’s enablers is more than zero but less than Cuba and way less than Iran. Today’s action (along with other recent OFAC actions) will help sustain our pressure at a moderate level, but will not raise it to maximum.

So will this do anything? It could, in several ways.

We also see additional evidence in the indictment that the Chinese government – almost certainly among the world’s most controlling when it comes to the presence of foreign nationals on its soil – allowed sanctioned North Korean banks to operate in Shenyang, Zhuhai, Dandong and Beijing. But the UN Panel of Experts has been telling us that for years.

Senators Van Hollen and Toomey and dozens of others in Congress have already called for both the Obama and Trump administrations to penalize Chinese banks over North Korea sanctions. I’m confident enough that Congress will eventually act again that I’ve already drafted model legislation.

The second way depends on how much money is frozen in the defendants’ accounts. The answer as noted above is $63,511,387.85, a very good haul. It might be more than the combined total of USAO DC’s asset forfeiture against North Korean targets since it went to work in 2017.

That’s a big enough amount to have a significant ripple effect in the banking industry. Consider that the Banco Delta Asia action only caught $25 million. In addition, if defendants are now scurrying and trying to move additional amounts, Treasury or the Department of Justice can also seize that money or even file a superseding indictment.

Third, as with the Banco Delta case, the amount of money seized or blocked tends to underestimate the impact of an enforcement action. As with the naming of other North Korean agents earlier, the naming and indictment of these 33 FTB agents will cause the financial system to exclude them, and to freeze and close their accounts.

A few of the defendants are FTB bigwigs in Pyongyang whose names were already associated with it. Others operated previously known FTB fronts, such as Mingzheng International Trading. Yet others – some of them Chinese nationals – operated clandestine branches under fronts or fictitious names like Sumer International Group and Headsoon Trading. One Chinese national named Jin Yonghuan ran the FTB’s covert branch in Libya.

By now, their passport numbers are already in the software banks use to stay compliant with Treasury’s know-your-customer regulations.

The designation of specific agents can be a game of whack-a-mole, but we whacked a lot of moles on Thursday. The indictment notes that the FTB has about 300 employees in its various branches and subsidiaries; prosecutors indicted more than 10 percent of that number.

Pyongyang can easily register new fronts in Hong Kong, but it spent years vetting, grooming, training and embedding the people who laundered money through them, and those people have spent years building contacts and learning tricks. See Paragraph 37.

Many of these people will now move to China, but their effectiveness and portability to places like Singapore, Indonesia, Malaysia, and the Gulf states will be very limited. Any of these 33 people could be vulnerable to extradition in those places.

Furthermore, the transaction chronologies of some of those FTB branches abroad start to trail off beginning in 2017. That may mean that the member state governments have already closed those branches.

Fourth, if the disruption of the network means that other agents can’t make their loyalty payments, they become easier marks for US intelligence officers – and might even be willing to bring their phones or computers with them. Now that South Korea no longer welcomes defectors with open arms, our intelligence agencies have lost both an ally and a competitor.

And if today’s action leads to more intelligence windfalls or defections that disrupt the networks even more, the greater “centralized, limited, and vulnerable” network could enter a death spiral.

All of these activities prop up the value of North Korea’s currency, maintain the state’s access to foreign exchange, and lengthen the state’s financial life expectancy.

Sixth, as with China’s banks, China’s megaconglomerates must be disabused of the idea that they’re too big to sanction for breaking North Korea sanctions.

Thursday’s action could mean more bad news for Huawei, which is already under indictment in the Eastern District of New York. The indictment references illegal transactions between an FTB front and “Panda International Information,” which was later added to the Commerce Department entity list for sanctions violations.

The same company’s name came up in Ellen Nakashima’s reporting for the Washington Post, which revealed that Panda and another company called Dandong Kehua Economic and Trade Company helped Huawei assist the North Korean government with the creation of its censored cell phone network.

Another tantalizing reference is to “Chinese Telecommunication Company 2 handsets” that mentions possible export control violations. The indictment does not mention Huawei by name.

Joshua Stanton originally posted the article on his blog FreeKorea.US, from which Asia Times republishes, with his permission, a somewhat shortened version. The views expressed are Mr. Stanton’s own. 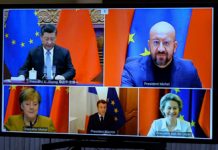