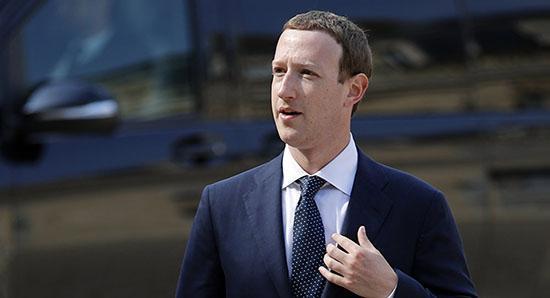 Alex Hern and Julia Carrie Wong in Oakland  –  The  Guardian

Facebook employees are staging a rebellion over Mark Zuckerberg’s refusal to act against Donald Trump, expressing their dissatisfaction with their boss on social media in a rare public display of dissent and, in some cases, staging a “virtual” walkout.

Disagreement came from employees at all levels of the company, including some senior staff. Particular criticism was levelled at Zuckerberg’s personal decision to leave up the Facebook version of a tweet sent by Trump in which the president appeared to encourage police to shoot rioters. By contrast, Twitter hid the message behind a warning.

Andrew Crow, the head of design for Facebook’s Portal video-phone, tweeted: “Giving a platform to incite violence and spread disinformation is unacceptable, regardless who you are or if it’s newsworthy. I disagree with Mark’s position and will work to make change happen.”

Jason Stirman, a member of the company’s R&D team and the former chief executive of the “mental training” app Lucid, also posted on Twitter, saying: “I don’t know what to do, but I know doing nothing is not acceptable. I’m a FB employee that completely disagrees with Mark’s decision to do nothing about Trump’s recent posts, which clearly incite violence. I’m not alone inside of FB. There isn’t a neutral position on racism.”

“Personally, I have a visceral negative reaction to this kind of divisive and inflammatory rhetoric,” Zuckerberg added. “I disagree strongly with how the president spoke about this, but I believe people should be able to see this for themselves, because ultimately accountability for those in positions of power can only happen when their speech is scrutinised out in the open.”

The number of Facebook employees complaining publicly is small in absolute terms – a fraction of the company’s 45,000 or so employees – but is a rare external display of dissatisfaction with the leadership of Zuckerberg, who controls 57.9% of the voting rights on Facebook’s board. The complaints are mirrored in internal discussions, according to reports in the New York Times and the Verge, where workers accused the company of applying its rules unevenly so as to avoid angering Trump.

Late on Sunday night, Zuckerberg committed a $10m donation from Facebook to groups working on racial justice. “It’s clear Facebook also has more work to do to keep people safe and ensure our systems don’t amplify bias,” he said in a post to his Facebook page. “I hope that as a country we can come together to understand all of the work that is still ahead and do what it takes to deliver justice – not just for families and communities that are grieving now, but for everyone who carries the burden of inequality.”

More than a dozen Facebook employees had published messages of dissent on Twitter by Monday morning, with some saying they were participating in a “virtual walkout”. The vast majority of Facebook employees are working from home because of the coronavirus outbreak. Dozens of employees requested the day off in order to support protests against police brutality, according to the New York Times.

A Facebook spokesperson said the company would not require participants in the “walkout” to use paid-time off. “We recognize the pain many of our people are feeling right now, especially our black community,” the spokesperson said in a statement. “We encourage employees to speak openly when they disagree with leadership.”

Waiting for the oversight board

Some appealed to the company’s oversight board, a quasi-independent body that Facebook has funded to act as a “supreme court” capable of ruling on difficult questions around content moderation. But on Saturday, the board said it would not be able to intervene in time, but was “working hard to set the board up to begin operating later this year”.

A co-chair of the nascent body is embroiled in a separate controversy around racist speech. Michael McConnell, a Stanford Law professor recently named one of the four co-chairs of the oversight board, is facing widespread criticism from students and faculty after he used the N-word during a Zoom lecture on Wednesday – two days after the death George Floyd. McConnell stopped the Zoom software from recording before he spoke the word as part of a quotation attributed to Patrick Henry.

The Stanford Black Law Student Association responded with a scathing open letter written as A Guide for White Professors on How to Say ‘[N-word]’ in Class. After satirizing the timeworn arguments of those who defend use of the slur – “After all, we can’t sanitize history” – they added: “If there is one thing black students know, it’s our own history. Ahmaud Arbery is our history. Breonna Taylor is our history. George Floyd is our history. White men refusing to stop saying [N-word] is our history.”

In an email reviewed by the Guardian, McConnell said he “made the pedagogical choice with good will” but understood why students were upset and “will not use the word again in the future”. McConnell has been contacted for comment.

The oversight board provided a statement of support for McConnell from fellow co-chair Jamal Green, a Columbia law school professor who is black. “While I might have made a different choice in this instance, I take professor McConnell at his word that he has learned from his experience, as we all must strive to do as educators.”

The oversight board also issued a statement saying that the board’s “diversity is its core strength”. “We respect the right of the students to speak out about how Michael’s use of this word has impacted them, and appreciate Michael’s explanation of his pedagogic purpose, as well as his commitment not to use the word again.”