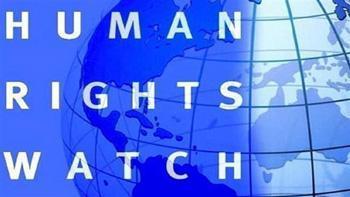 Unrest over the death of a black man in U.S. police custody has reversed the usual tide of diplomacy over human rights, as nations stung by American criticism over the years return fire and accuse Washington of double standards.

China and Iran, described respectively in the past as authoritarian and a mafia-like state by U.S. Secretary of State Mike Pompeo, both urged the United States in recent days to tackle racism and protect the rights of minorities.

U.S. protesters ignored curfews overnight, angry over the treatment of George Floyd who died after a white policeman kneeled on his neck for nearly nine minutes in Minneapolis on May 25. President Donald Trump has threatened to deploy the military to quell the nationwide unrest.

Chinese state media have given heavy coverage to the protests, even on the eve of the anniversary of its own military crackdown on protesters 31 years ago, an event it rarely mentions. On June 4, 1989, troops fired on students in Beijing’s Tiananmen Square. Rights groups say thousands may have been killed.

“China can tell right from wrong. We always oppose racial discrimination. On this issue, no double standards should be applied,” Chinese foreign ministry spokesman Zhao Lijian told a regular media briefing on Wednesday.

“The people’s slogan of ‘I can’t breathe’, which can be heard in the massive protests throughout the U.S., is the heartfelt words of all nations against which the U.S. has committed many atrocities,” Ayatollah Ali Khamenei said in a televised speech.

“The crime committed against this black man is the same thing the U.S. has been doing against all the world,” he said, citing Afghanistan, Iraq, Syria and Vietnam.

Hundreds were killed in Iran in November when protests erupted over a fuel price hike, believed to be the worst civil unrest since Iran’s 1979 revolution. Many Iranians on social media have accused Iran’s clerical establishment of double standards in its criticism of Washington over the protests.

Russia and Turkey also chimed in, complaining about heavy-handed police treatment of their journalists covering the protests. Both have been targets of human rights criticism from Washington, including over press freedom.

“We consider it unacceptable for U.S. law enforcement officials to use special equipment — rubber bullets and tear gas — against media representatives after they have presented their press cards,” Russia’s foreign ministry said in a statement last weekend.

Turkey’s communications director, Fahrettin Altun, tweeted on Monday: “Press freedom is the backbone of democracy.” According to the Committee to Protect Journalists, Turkey held 47 journalists in prison at end-2019, second only to China.

A U.S. diplomat, speaking on condition of anonymity after witnessing protests first-hand in Washington this week, said heavy-handed police tactics and divisive political rhetoric made U.S. diplomacy much more difficult.

“Using authoritarian tactics emboldens our enemies and dismays our allies,” he said. “It makes us look like hypocrites. It degrades America’s prestige and power, leaves all Americans less safe.”

Several U.S. foreign missions based in Africa have put out statements expressing grief over the killing of Floyd. The State Department did not address the question of how U.S. diplomacy might be affected overall, but said debate on such issues made societies worldwide stronger.

“The United States is proud of the role we have played in defending and advancing human rights and fundamental freedoms around the world. Governments that take human rights seriously are transparent and welcome conversations about addressing concerns and making improvements,” a State Department spokeswoman said.