Washington (CNN)As protests against racial injustice engulf America and spread globally, State Department officials have suggested Secretary of State Mike Pompeo address his workforce on the issue that, in many ways, directly impacts their work. So far, he has declined to do so, explained sources familiar with the suggestion.

Pompeo has been largely silent on the matter — leaving US diplomats at home and overseas feeling abandoned as they face questions about the unrest from their counterparts around the world. Some are fearful that the nation’s top diplomat is putting his personal political interests and his relationship with President Donald Trump ahead of his department’s need for guidance and leadership. 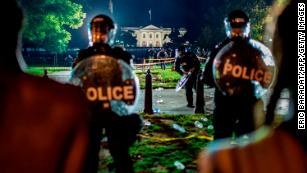 The top US diplomat expressed condolences to the family of George Floyd — the African American man who was killed while in police custody in Minneapolis — in a Fox News interview more than a week ago, calling the actions of the officer who put his knee on Floyd’s neck “abhorrent.” But the Secretary of State has not addressed the underlying issue of racial inequality in the US or sent any messages of support and empathy to the department writ large.

“Pompeo has literally decided he is not touching it,” said one US diplomat. “This is going to reflect on our image around the world. What Pompeo should be saying is we are a very flawed society, but we are trying to get better, we are resilient, we can do this, and I support my diplomats during this emotional time. We have heard none of that.”

Most of Trump’s Cabinet officials haven’t spoken out about the protests, but Pompeo is in a unique position, overseeing a 75,000 strong workforce that is asked to represent values of equality and freedom that are undermined by racial inequality and police brutality, and the principles of free speech and assembly that the administration disregarded when it violently dispersed peaceful protestors at the White House last week.
Diplomats have gotten little to no guidance on how to bridge that disconnect between those fundamental American values and the administration’s actions. Diplomats overseas have also had to contend with massive protests about Floyd’s death outside US embassies, compounding the need for guidance and reassurance from the top US diplomat.
A State Department official said the secretary could still release a statement and cited mounting pressure more than two weeks after Floyd’s killing.
“His silence is deafening,” a second US diplomat said of Pompeo.
“Not hearing from him makes this a very awkward time,” said a third US diplomat.
“It would be really nice to hear from the secretary,” said a fourth diplomat. 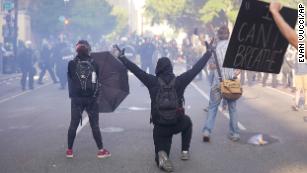 Pompeo’s decision not to address his workforce is particularly heartbreaking for African American foreign service officers, three of them explained. Over the weekend a group of more than 100 black foreign service officers discussed the matter in a Zoom call — including their personal pain and frustrations about Pompeo’s silence, according to two sources on the call.
They agreed that they will need to move forward in advocating for racial diversity at the department without his support, one of the sources explained.
During Pompeo’s time at the department the percentage of African American foreign service officers has decreased slightly from 7.95% to 7.1%, according to statistics from the American Foreign Service Association.
A fifth US diplomat said that any statement from the top US diplomat must also be accompanied by action.
And on Tuesday, the American Academy of Diplomacy called on the State Department to do more to foster diversity.
“We believe that a diplomatic service and other representatives of US foreign policy need to look like America, an essential part of representing our country abroad,” AAD Chairman Thomas Pickering and AAD President Ronald Neumann wrote in a statement. “The State Department falls short of this goal. Women and minorities continue to be significantly underrepresented in the Department of State, most glaringly in the senior ranks.”
“Out of 189 U.S. Ambassadors serving abroad today, there are three African American and four Hispanic career diplomats,” they noted.

‘A difficult moment for all of us’

Last Thursday, Pompeo scheduled a press conference where it was widely expected he would be asked about Floyd’s killing, issues of racial inequality, the White House response to protests and the impact on diplomats overseas — but his appearance was canceled at the last minute and never rescheduled.
The US diplomats CNN spoke with do not see the fight for racial equality in the US as being fundamentally political, yet many of them said they saw Trump’s reaction as having politicized the movement and the moment.
Beginning with his tenure as CIA Director and continuing into his time as America’s top diplomat, Pompeo has remained loyal to Trump. US diplomats fear that Pompeo’s desire to keep the peace with the White House is driving his silence.
“There is an unwillingness because of the way the President is treating it,” said the first US diplomat. Speaking of the President’s response to the protests, including his call for a militarized response and his defense of police violence caught on film, this diplomat said, “It makes it poisonous for people to try to take him on, or to even try and address it.” 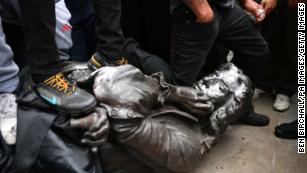 State Department officials around the world have had to engage in challenging discussions with their counterparts about what is happening across America. Many counterparts have expressed sympathy, but others are looking to the US diplomats to explain what is happening, two diplomats said.
Beyond Pompeo, some top State Department officials have addressed the gravity of this moment with their teams.
Deputy Secretary of State Steve Biegun sent a note to the department addressing Floyd’s death, saying that “each of us should take the opportunity to reflect upon that tragedy and what we can do in our lives to both bring about healing and to address its underlying causes.”
“As Americans, it is a difficult moment for all of us,” Biegun wrote in the message, which was seen by CNN. “To that end, I have encouraged Department leaders across our missions overseas and our bureaus to take some time to open dialogues with their teams and create opportunities to share experiences as we reflect on how these experiences impact our communities and as we strive to represent American values in our work.”

‘He couldn’t be bothered’

Ambassadors have held virtual town halls with staff in multiple countries to discuss the topic. Last week, Assistant Secretary David Schenker held a meeting on the matter with his bureau and sent out a cable expressing his “personal commitment to diversity and inclusion.”
Current and former officials have said that messages from the leaders at the department have met diplomats’ thirst for thoughtful leadership but said that the secretary’s voice is still needed. 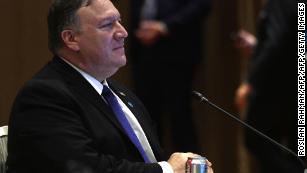 “In every administration that I have worked for in the past, in moments of crisis, messages came directly from the Secretary of State,” said former Ambassador Nancy McEldowney. “As the leader of the agency, as the top diplomat for our country and as the person that people should look to for guidance — not just operational guidance, but moral guidance in a crisis — in the past, it has always come from the Secretary of State.”
“Now, I don’t criticize Biegun for sending that message, I think it was good that he sent it, but why did it not come from Pompeo?” McEldowney asked. “I think because he couldn’t be bothered, but also because he didn’t want to get sideways with Trump.”
Pompeo did address Floyd’s death in a scathing statement going after the Chinese Communist Party’s “callous exploitation of the tragic death of George Floyd,” in which he said China’s effort to “justify its authoritarian denial of basic human dignity exposes its true colors.”
Pompeo — who was not with Trump when the President walked to St. John’s Episcopal Church last week after authorities forcibly pushed out peaceful protesters — has remained silent, however, about the fundamental plight of peaceful protestors.

‘Disappear and be quiet’

A State Department spokesperson said the US and free and open societies around the world “are strengthened” through citizens exercising their right to free speech, which triggers debates. When asked whether the department has sent any guidance to employees in the US and overseas about participation in George Floyd protests, the spokesperson pointed to the right of Americans to peacefully protest being protected by law.
“Although our laws provide protections against racial discrimination, discrimination and the legacy of slavery is an unfortunate part of the United States’ history and an all-too-present reality for many Americans. The US Constitution expressly protects the right of peaceable assembly and to petition for a redress of grievances,” the spokesperson said, adding that “many in the United States are peacefully exercising their right to peaceful protest to address the challenges our society faces.”
Former State Department spokesperson Jen Psaki said the statement “rings hollow” because it is not followed up by public support from Pompeo himself.
“It may be that Pompeo is figuring out that his best survival tactic here is to disappear and to be quiet,” Psaki said.