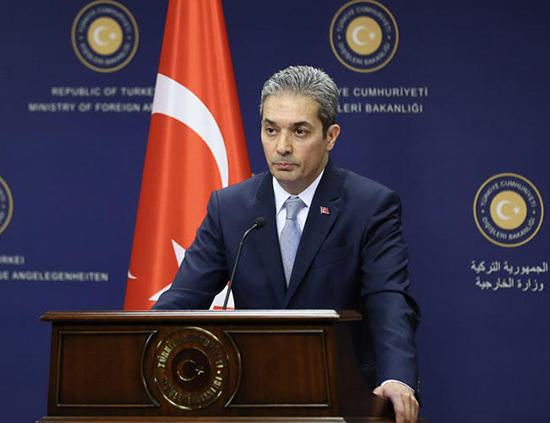 Turkey has slammed French President Emmanuel Macron over his remarks on Ankara’s role in the Libyan conflict as a demonstration of “the eclipse of reason,” accusing Paris of playing a dangerous game and dragging the war-torn country into chaos, the Hürriyet Daily News reported.

“French President Macron’s description of the support of our country is pledging to the legitimate government of Libya in line with the relevant UN resolutions as a ‘dangerous game’ can only be explained as the eclipse of reason,” read a written statement issued on Tuesday by Hami Aksoy, spokesperson of the Foreign Ministry.

The statement followed Macron’s accusations concerning Turkey’s role in Libya, when he said in a press conference in Tunis, “I have already had the opportunity to say very clearly to President [Recep Tayyip] Erdoğan, I consider that Turkey is playing a dangerous game in Libya today and going against all of its commitments made at the Berlin conference.”

“We won’t tolerate the role that Turkey is playing in Libya,” he added.

Turkey and France are in rival camps in Libya as Ankara supports the internationally recognized Government of National Accord (GNA) in Tripoli and Paris backs General Khalifa Haftar troops, which have violated the ceasefire in the country multiple times.

Turkey signed a deal with the GNA in late 2019 to provide military consultancy in its efforts to defend Tripoli against Haftar’s forces. France openly backs Haftar along with Russia, Egypt and the United Arab Emirates.

“Macron should recall that many difficulties experienced in today’s Libya stem from Haftar’s aggression and breaking of ceasefires,” Aksoy said, accusing Paris of responsibility for dragging Libya into chaos because of its support for illegitimate powers in the country. “That’s why it’s France that is playing a dangerous game in Libya,” he stated.

The Libyan people will never forget the harm inflicted by France due to its selfish interests, Aksoy said, calling on France to pay attention and lead efforts for investigating war crimes committed by Haftar’s forces and mercenaries.

The French stance is plunging the entire region and the eastern Mediterranean into further trouble and escalating tension, Aksoy said, calling on France to cease acting like a littoral country in the region.