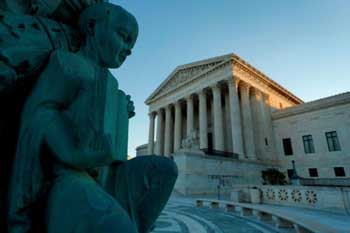 WASHINGTON (Reuters) – The U.S. Supreme Court on Thursday enhanced the ability of President Donald Trump’s administration to quickly deport illegal immigrants including asylum seekers with limited judicial review, handing him a victory in a case concerning one of his signature issues in an election year.

The justices ruled 7-2 in favor of the administration in its appeal of a lower court ruling that a Sri Lankan farmer named Vijayakumar Thuraissigiam had a right to have a judge review the government’s handling of his bid for asylum.

The San Francisco-based 9th U.S. Circuit Court of Appeals in 2019 ruled that under the Constitution’s suspension clause – which relates to a person’s ability to challenge confinement by the government – courts must have the power to review Thuraissigiam’s claims.

Trump’s administration has said immigrants seeking admission do not have any constitutional rights and that the Constitution has historically never required access to the type of court review Thuraissigiam sought.

Reporting by Andrew Chung in New York and Lawrence Hurley in Washington; Editing by Will Dunham