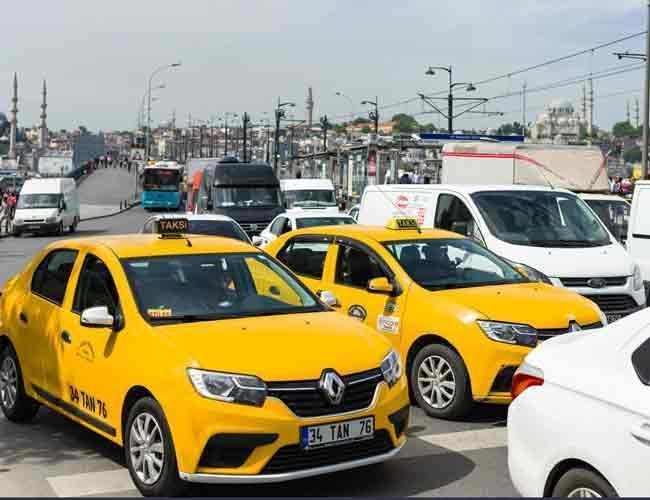 Istanbul’s taxi drivers almost staged a revolt when the city’s Mayor Ekrem İmamoğlu said that the number of taxis operating in the city was insufficient and that some 6,000 new taxis equipped with technological applications would be put into operation.

While many Istanbulites threw their support behind the mayor’s decision on social media, many taxi drivers lashed out at the move and said they would stop İmamoğlu from realising his plan just as they had stopped Uber operating in the city through their protests and legal action.

İmamoğlu announced on June 12 that the municipality would launch a new programme for taxis. Some 6,000 new taxis will start operating soon, with drivers will wear uniforms and work three shifts. The taxis will be equipped with an electronic system to ease payments.

The proposal to roll out 6,000 new taxi licenses was rejected by the Istanbul’s Transportation Coordination Centre (UKOME) on Thursday by 14 votes to 11, but has been transferred to a subcommittee for consideration at the next UKOME meeting.

There are 17,395 licensed taxis operating in the city and new taxi plates have not been on sale since the 1960s – with the exception of provisionary decisions in Istanbul – meaning the number of taxis on Istanbul’s roads has not significantly changed in over half a century.

Taxi drivers say they suffer from unlicensed taxis. Meanwhile, the drivers who own their taxi plates are in the minority and most of the taxi drivers have a hard time to meet the monthly expenses of the rental license plates which cost around 9,000 lira ($1,313) per month.

“The market is uneasy about the decision of the municipality. There is turmoil in the market. As someone who is in the taxi business, we are against the decision and ask the mayor to reconsider,” Gürsoy Atlı, the owner of an auto gallery that trades in taxi plates.

“Taxi drivers are not like before. We can easily tie Istanbul’s traffic up,” he said.

İmamoğlu, on the other hand, responded to these statements with his own strong words.

“Last week, I mentioned that a new programme will be launched, and 6,000 new taxis will start operating in Istanbul. Of course, there is a process and a timeline. We will not introduce all 6,000 taxis in one day,” İmamoğlu said.

“Yes, we will sit and discuss with the people in the business, the real representatives of the sector. But no one should try to limit us by acting only on self-interest,” he said.

The war of words between İmamoğlu and the beneficiaries of taxi plate business has led to hot debates on Turkish Twitter.

“We do not want to entrust our children to taxi drivers in a city like Istanbul. I want to see all information regarding the driver, whereabouts of the taxi, the cost of the ride on my mobile phone. That’s why I support the municipality’s project,” one Twitter user said.

“Uber drivers were well-maintained and respectful, vehicles were immaculate. No traffic rule violations. Yellow taxis suck. The municipality should start the project soon,” another user said.

On the other hand, those who oppose İmamoğlu’s project are also trying to make their voices heard on social media. One of them is Melih Gökçek, the former mayor of Turkey’s capital city Ankara.

“İmamoğlu threatened the taxi drivers by saying  ‘Do not try to threaten us.’ Now, the taxi drivers will bring out the issue to Istanbulites in all corners of the city. You will understand what I mean when you get in a taxi,” Gökçek tweeted.

Tensions have frequently been high among taxi drivers since Uber entered the country in 2014. The feud in some instances led to violent attacks against Uber drivers, and the head of the Chamber of Istanbul Taxi Businesses accused Uber of launching a targeted attack on his industry carried out by what he called “the Jewish lobby”.