US Navy Admiral James G. Foggo, commander of US Naval Forces in Europe and Africa and NATO’s Allied Joint Force Command Naples, said Friday that China is actively working in Europe and Africa to subvert the international rules-based infrastructure that has maintained peace since the end of World War II. Given the US’ unprecedentedly intensifying strategic competition with China, Foggo’s remarks once again reflect how paranoid Washington can be with regard to Beijing.

“NATO can no longer ignore China’s activities in Europe,” Foggo said, adding, “Our collective strength, that ability to project power with the help of our capable NATO allies and partners is what enables us to confidently state that there truly is no competition in this era of great power competition that we cannot overcome.”

Nonetheless, the US today is no longer willing to play the role of a responsible big country. Meanwhile, it has been using the US-led NATO as its tool to maximize its vested interests in major power competitions.

Europe, which is clearly aware of what the US is up to, will certainly not let itself be led by the nose. German Chancellor Angela Merkel said also on Friday, “Should the US now wish to withdraw from that role of its own free will, we [Europe] would have to reflect on that [Europe-US relations] very deeply.” She also noted that the EU “should develop a policy that reflects our interests and values” on China.

But the US doesn’t take EU’s concerns into its consideration. A latest example is that Washington has coerced European countries to pick sides against China while at the same time considering a trade war with Europe. Not to mention that the US has pulled out of the Paris Agreement on climate change, the Iranian nuclear deal, the Treaty on Open Skies, among others, throwing Europe into great uncertainties and anxieties.

Similarly, in hyping the so-called threat that China poses to Africa, the US does not care about the continent at all but wishes to rope African countries into its campaign against China.

China has traditional friendships with African countries. The cooperation between them in various fields has played a vital role in promoting the continent’s development.

Foggo attempted to smear China’s assistance to African countries as a “security concern.” But African people are not fools. They can tell which country is their real friend: Is it the one who sincerely supports their development or the one that referred them as “shithole” nations? The answer is crystal-clear.

Dominated by a Cold War mind-set, the US has been smearing any effort and contribution China makes to promote global development as an attempt to “subvert the international rules-based infrastructure.” However, the US itself is actually the real threat and destroyer of the current world order.

As a product of the Cold War, NATO cannot get rid of its outdated mind-set. Although Washington is still trying to divide the world into camps to confront each other, this time it is unlikely to find allies that will blindly follow its steps.

US sanctions for Navalny poisoning may come on Tuesday – sources 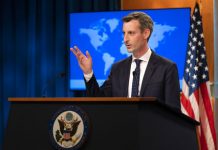