Coronavirus restrictions have dampened public demonstrations in Jordan, but government statements have reassured the public on the state’s opposition to Israel’s plans.

Jordanians, usually swift to express solidarity with their Palestinian neighbours, have left streets quiet since Israel announced plans to annex parts of the West Bank (AFP)
By  Mohammad Ersan in Amman – MEE

For a public usually swift to express solidarity with their Palestinian neighbours, the recent popular silence has been deafening in Jordan, with nary a protest since Israeli Prime Minister Benjamin Netanyahu announced on 1 March that his government was planning to annex large areas of the occupied West Bank by 1 July.

On 21 June, MP Saud Abu Mahfouz, a member of the Islamic Action Front (IAF) party, stood alone outside the US Embassy in Amman to express his rejection of the annexation and US President Donald Trump’s much-criticised Israel-Palestine plan – also known as the “deal of the century”.

This one-man protest has been the only one since the annexation plans were made public, despite Jordanians having taken to the streets en masse in the past to oppose a gas deal with Israel.

So how can this silence be explained? Political and media sources tell Middle East Eye that the continued precautions amid the coronavirus pandemic, coupled with a strong stance by the Jordanian leadership, have played a large role in dampening public uproar in the streets.

However, some said they worry that the strict measures to contain the spread of Covid-19 could become a convenient excuse to discourage public displays of dissent in the country.

Paralysed by the pandemic

In March, Jordanian authorities issued strict orders in order to tackle the coronavirus pandemic, earning praise from citizens for taking swift action to contain the spread of the illness in the country.

Among these new regulations, meetings of 20 or more people have been forbidden.

Jordanian political parties have pointed to these restrictions on public meetings to explain their relative inaction following Netanyahu’s annexation plans.

“The reason for the absence of protests is a medical one. The defence orders prevent more than 20 persons from meeting. This has not changed even though the pandemic has been under control,” IAF secretary-general Murad Adaileh told MEE.

“The annexation plan affects Jordan’s national security and demolishes what is known as the two-state solution,” he said. “That is why the government must stop the defence orders. We are studying how to hold a protest while respecting distancing and other safety health concerns.”

Left-wing parties have also been relatively inactive, not going beyond issuing the usual denunciations.

But for Abdel Majid Dandis, a politburo member for the left-wing Wihda (Unity) Party, “the health restrictions due to the coronavirus are not the only reason for the restrictions of popular protests against the annexation plans”.

“The ban on large gatherings because of the coronavirus is a factor that has left an impact on political activities,” he said. “But a much more important factor has been the general restrictions on freedoms, especially the freedom of expression. This restriction has left a strong impact.”

Dandis referred to the detention of the secretary-general of Wihda, Said Diab, who was referred to Jordan’s cybercrime unit by the government because of an article he wrote on the occasion of Jordan’s Independence Day on 25 May.

‘The government needs to reflect the people’s mindset, which refuses all plans that aim at normalisation’

In his article, Diab called on Jordan to free itself of the influence of foreign states, particularly from the West, and to stand up more to Zionists and Israel supporters in the region.

Jordan’s attorney general decided that Diab should be detained, but the Wihda leader has since been transferred to hospital for a heart operation.

Despite not taking to the streets, Jordanian political parties, whether Islamists, leftists or nationalists, have been calling on the government to cancel the gas deal with Israel as a response to the annexation plan.

Mohammad al-Absi, the leader of a campaign entitled “The gas of the enemy is an occupation” called for permission to hold protests against annexation, “because it is a part of the rejected deal of the century”.

“The government needs to reflect the people’s mindset, which refuses all plans that aim at normalisation” of relations with Israel, Absi told MEE.

In spite of these concerns, the Jordanian government has expressed strong rejection of Israel’s annexation plans.

In May, King Abdullah told German magazine Der Spiegel: “I do not want to make any threats and create an atmosphere of controversy, but we are considering all options… We agree with many countries in Europe and with the international community that the law of the fittest should not apply in the Middle East.”

Prime Minister Omar Razzaz has openly discussed the likelihood of conflict with Israel if it chose to go forward with annexation.

“The annexation that the Israeli occupation is planning to execute in the West Bank will bring conflict and tension,” Razzaz said in a speech broadcast on 21 June. “We are facing two paths… either the path of peace or the path of conflict.”

Omar Kallab, a Jordanian writer and TV anchor, believes that the government’s stance has left a mark and lessened the desire among citizens to go out and protest.

“The strong position expressed by the king has satisfied the aspirations of many and has left little room for people to protest,” Kallab told MEE. “That is why the situation now is very different than when the Bahrain workshop [for the Trump plan in June 2019] took place.

“A clear and unambiguous official political position relaxes the activists, and when the coronavirus pandemic put [on] restrictions, people agreed to refrain from demonstrating because they were satisfied with the king’s position.”

For Kallab, the “conflict” alluded to by Razzaz is open-ended.

“All options are open, and the doctrine of the Jordanian military regarding the struggle with Israel has not changed,” the journalist said. 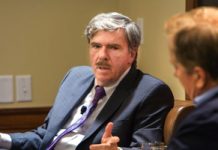