“It’s clear that the pandemic is doing some fundamental damage to the job market,” said Mark Zandi, chief economist for Moody’s Analytics. “A lot of the jobs lost aren’t coming back any time soon. The idea that the economy is going to snap back to where it was before the pandemic is clearly not going to happen.”
The June jobs report last week showed a net gain 4.8 million jobs, a record one-month jump, according to Labor Department data. Virtually all of the people returning to work were on temporary layoffs, such as workers in factories, stores, hotels, bars and restaurants that are reopening.
But at the same time, 759,000 people were laid off from jobs that won’t be coming back. That marks the second-largest monthly increase the United States has ever seen, topped only by an 805,000 jump in January of 2009, in the depths of the Great Recession.
There’s now a total of 3.7 million unemployed Americans whose previous jobs are gone for good. And millions more are at risk.

More than 10 million Americans are currently categorized as temporarily out of work. But historically, nearly 30% of people who tell the Labor Department that they are temporarily unemployed never get their job back, said Heidi Shierholz, senior economist at the Economic Policy Institute, a liberal think tank.
“Even though we don’t know if the historical record will hold in this case, it’s an extremely valid concern that not all of those people are going to get called back,” she said.
People who are counting on businesses reopening their doors may be surprised to find that a temporary loss has become permanent one, said Zandi.
Some of those unemployed were holding temporary jobs that came to an end. The end of a temporary job would have been more likely to be replaced by a new job in the strong job market that existed just last year.
But most of those 3.7 million workers lost long-term jobs.

‘This is just the beginning’

The recent spike in Covid-19 cases in different parts of the country, and the new round of stay-at-home orders and business shutdowns weren’t captured in this latest jobs report, according to both Zandi and Shierholz.
“The intensification of the virus has led to a second round of closure that might be too much for many of these businesses,” said Zandi.
The speed of the job losses is another reason for concern. The Great Recession was already more than a year old when it hit those record figures for permanent job losses. As economic problems build, economists say there will be more permanent job cuts ahead.
“This is just the beginning of the increase in permanent job losses,” said Zandi.

The latest government data available don’t account for many workers who are still on the job but are expected to be let go. For example, Boeing (BA) announced plans to cut 16,000 workers, with 12,300 of those job cuts already being identified through buyouts or involuntary permanent layoffs. But virtually all of those affected workers are still on the job as of today. 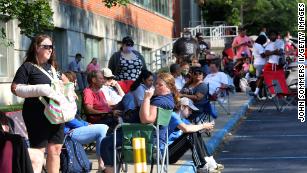 Similarly, thousands of stores are closing permanently but still have workers in place as retailers hold closing sales.
And deep financial problems at state and local governments, most of which began a new fiscal year last week, are expected to lead to millions of additional permanent job cuts in the coming weeks and months unless Congress agrees to new round of financial assistance.
But Zandi said he’s concerned that the good headline number in last week’s jobs report might make it tougher to get the needed help passed through Congress.
“People might look at the better than anticipated jobs numbers, they say ‘The coast is clear economically,'” he said. “That’s the exact wrong message.”