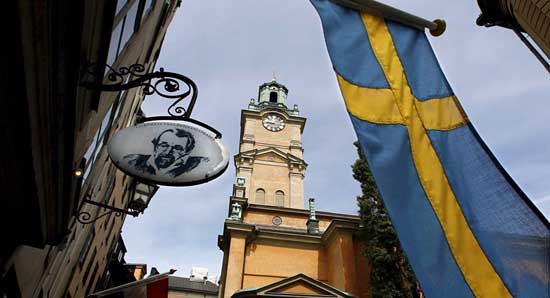 According to scientist and board member of the Swedish Humanist society Patrik Lindenfors, the centuries-old Swedish flag is rife with Christian heritage and should be replaced with something more inclusive.

In the wake of the massive protests around the world, purportedly against racism and colonialism, calls have been made to do away with the cross on the Swedish flag, because it represents the nation’s Christian heritage and the oppression it allegedly stands for.

In his opinion piece in the newspaper Göteborgs-Posten, board member of the Humanist Society Patrik Lindenfors called the flag “problematic” and compared the Swedish cross to the Saudi flag that features the Islamic creed, or the shahada. Lindenfors is a researcher in biological and cultural evolution at the Institute for Future Studies, and is also associated with the Centre for the Study of Cultural Evolution and the Department of Zoology at Stockholm University.

“We have had religious oppression in Sweden for many centuries, which the flag symbolises. Not at the Saudi level, but it is actually only in the past 70 years that we have had a reasonably sensible religious freedom where minorities’ views are accepted in society. Complete religious freedom was introduced as late as 1952”, Lindenfors mused.

The most decisive factor, however, Lindenfors claims, is its connection to slavery. According to Lindedfors, in the discussion about slavery in North America, there were Christians on both sides of the conflict, but those who argued for the preservation of slavery had more biblical words to quote.

“Although there is room for a ban on both eating seafood and dressing in fabrics of different yarns in the Bible, strangely enough there is no ban on slavery. And the conflict over North American slavery took place more than 1800 (!) years after Jesus,” Lindenfors wrote.

Furthermore, he stressed that most Swedes no longer profess Christianity and many have a different religious affiliation altogether. Merely 2% of the church’s members regularly attend Sunday services, an earlier poll has indicated.

Lastly, Lindenfors opined that using the Swedish flag for military operations in Middle Eastern countries is problematic, as it can be interpreted as a “crusade banner”.

In conclusion, he called the habit of using the flag “home blindness” and called for a more “unifying” symbol to represent Sweden.

However, his appeal didn’t hit home with many Swedes.

“No, Patrik. You can call yourself a researcher and a humanist, but when the word ‘problematic’ appears (here about the Swedish flag) reveal yourself as a university leftist. This very word, too, comes from the US, just like everything else in the identitarian left”, one Twitter user wrote.

​“How far shall we go?” mused another one.

How far shall we go?https://t.co/R4bnqdhiXn

​“It’s not an official flag day tomorrow, but sometimes you can feel the need to hoist the Swedish flag simply in protest against madness,” another one said.

​“I’m an enthusiastic atheist (= I do not believe in god and am glad that such a person probably does not exist), but this op-ed is silly. Symbols tend to exceed their historical origins. A yellow cross on a blue background means Sweden, full stop,” another one, an associate professor at Stockholm University, mused.

​However, some were more sympathetic and even suggested variants such as three yellow coins or a yellow hedgehog on a blue background.

Recently there have been calls in Sweden to replace Swedish heritage seen as “problematic”, “racist” or “colonial”. Among others, there were calls to replace the statue of famous warrior king Charles XII with a statue of climate campaigner Greta Thunberg and remove the statues of “colonial” kings and even botanist Carl Linnaeus.

The flag of Sweden features a yellow or gold asymmetrical horizontal cross on a field of blue. The Nordic cross traditionally represents Christianity and is believed to stem from the Danish flag. The legend has it that 12th-century King Eric IX saw a golden cross in the sky as he landed in Finland during the First Swedish Crusade in 1157. Interpreting this as a sign from God, he adopted the golden cross against a blue background as his banner.

by Igor Kuznetsov By contrast, Sweden, one of Europe’s leading jihadi exporters per capita, has been notoriously lax about holding Daesh* returnees accountable for...