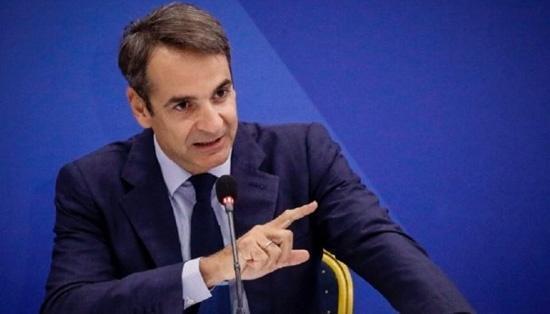 Greece expects NATO to play its role with regard to Turkish activities in the eastern Mediterranean and the Aegean, Prime Minister Kyriakos Mitsotakis has indicated, saying that the alliance’s “hands-off approach” is no longer acceptable to him, the Kathimerini daily reported.

“I think within NATO it is very clear that this hands-off approach – that ‘oh we have two NATO partners so we’re not going to go into the details’ – is no longer going to be accepted by me. I raised this with Secretary-General [Jens] Stoltenberg that we’re a NATO contributor and an ally and … when we feel that a NATO ally is behaving in a way that endangers our interests, we cannot expect from NATO a similar approach of ‘we don’t want to interfere in your internal differences.’ This is profoundly unfair for Greece,” Mitsotakis said during a conversation with former US ambassador to Greece and executive director of the Aspen Security Group, Nicholas Burns, at the online Aspen Security Forum on Wednesday.

“I think the alliance will find itself faced with the reality that an important member … behaves in a way that undermines the alliance and the interests of other members of the alliance. It’s an issue we can no longer afford to kick under the rug,” he said, adding that Turkey’s “unreliable behavior” within the alliance also raises security concerns.

“Purchasing the S-400 system is an issue of concern to all of us, including the US because it compromises the F-35, which is an integral part of NATO,” he said referring to the missile defense system Turkey has acquired from Russia.

The United States should be alarmed by Ankara’s activities in the eastern Mediterranean but also its involvement in Libya, Mitsotakis said, adding that a visit to Washington last December gave him a sense that “there is a bipartisan understanding that the relationship with Turkey is not the same that is was three, four years ago. It’s not as predictable.”

“Pieces of legislation sponsored by Senator [Robert] Menendez clearly are an indication that there is a much better understanding in Washington of what is really happening in the eastern Mediterranean,” the Greek premier said in reference to the Eastern Mediterranean Security and Energy Partnership Act of 2019.

Statements from the State Department have also been “overall quite supportive of Greece’s positions” with a “few exceptions,” Mitsotakis said.

“When there is encouragement for both parties to refrain this is a fundamentally unjust statement as far as Greece is concerned because we are not engaging in any provocative activity,” he said.

Mitsotakis added that there also appears to be a “much better understanding from within the European Union that Turkey’s role in our part of the world is really not very constructive.”

“Either the relationship is going to improve, or if Turkey continues to violate the sovereign rights of Greece and Cyprus, the European Union has to react,” the Greek prime minister said, stressing that Greece is not seeking to isolate Turkey but to encourage a more “productive relationship.”

‘Just a mention please!’ Trump demands credit for US vaccination plan as media report 100% of House Dems got the jab, unlike GOP

‘Together we stand by Israel’s side,’ says Austria’s Kurz & flies Israeli flag. What about dead Gaza children? Twitter users ask